IS the NS SPCA Dartmouth shelter the new PETA?

How is that for a title to a post? I've named it that way, because maybe it's true. I found an article from last July in the Metro Daily News that talks about how the Dartmouth shelter will come to your neighbourhood upon your request and trap your feral cats - and then immediately KILL THEM ALL. Read below for confirmation of that - "Any feral cats - which often run in groups as large as 20 - that are trapped are immediately euthanized, (Judith)Gass said"

I would like to submit that this is not what current literature on trap, neuter, and release of feral cats suggests - but it IS something that organizations like PETA - who don't think that companion animals should exist - do exercise.

This has to be the laziest incidence of animal management that I have ever encountered in all my years of researching, volunteering, and taking part in the animal advocate community.

Scrolling down the list of comments though - one name popped up that was VERY interesting - I'm not going to say WHO it is - but it's a current (as of Marc 22, 2008) Board of Director of the NS SPCA - who left the following comment on this article - it's VERY good!:

The best solution to preventing any disease is education. Trapping and euthanizing is not the answer. Our family was horrified that a humane society would even suggest that. I'm sure if the SPCA advertised that they were trapping, neutering and releasing cats the public would be much more supportive with fund raising and volunteering. Queens SPCA has a very aggressive spay/neuter program and it has made a tremendous difference in the number of feral cats in our area.

Another commenter left a link to an EXCELLENT website - it's http://www.alleycat.org/

Luckily as well - someone left 2 comments to this post - talking about a lady, Angela Miller (who I met last year when a group of us formed a group called Advocates for Responsible Pet Ownership in the HRM to target pet stores around Christmas time in 2006) - who has started to deal with the stray feral cat problem in the HRM on her own - check out the comments to see the local news storys about her.
What do you think?

Here is the article: 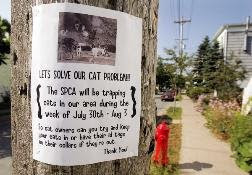 The SPCA is being extra diligent about trapping wild cats roaming city streets, due to health concerns.

"One of the reasons we're perhaps responding more to the feral colonies is because we think it's infecting the regular population, and we're pretty frustrated, because we're not being terribly successful treating this."

Many house pets venture outside, mingling with strays and - if they're not vaccinated - putting themselves at risk, Gass said.

She said the SPCA responds to hundreds of calls about feral cats each year, many from people who have tried unsuccessfully to feed and tend to the animals.

The latest call came from the Myrtle Street area of Dartmouth, where trapping will be attempted next week.

Residents are learning about the program from signs on telephone poles in the neighbourhood.

One, at the corner of Maple and Dahlia streets, features a photo of several cats and the heading Lets (sic) Solve Our Cat Problem.

"The SPCA will be trapping cats in our area during the week of July 30-Aug. 3 so cat owners can you try and keep your cats in or have their ID tags on their collars if they're out," it says.

While the wild cats are usually easy to recognize because of their aggressiveness, the SPCA often asks complainants to post "courtesy" signs so pets won't mistakenly be caught in the cage-like traps, said Gass.

Any feral cats - which often run in groups as large as 20 - that are trapped are immediately euthanized, Gass said, who owns two formerly wild ones.

That may help stem the respiratory-illness tide, which has prompted the SPCA to isolate more than 40 affected cats and kittens in a rented space in Cole Harbour.
Posted by Joan Sinden at Saturday, March 22, 2008