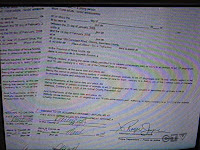 So today cruelty charges were laid in the Celtic Pets case - 4 charges each against Zonda MacIsaac and Alice MacIsaac. The evening news reports are below.

It looks like the NS SPCA is saying that between January and February 2008 that Zonda and Alice willfully neglected the animals in their care and they're charging them under the criminal code of Canada for it.

I love in the news piece how Judith Gass goes on about that the seizure:

I should say though that she said this on March 14th (the line above her head says "February 7th" - I think Elizabeth Chiu's editors got their dates mixed up - Judith Gass is wearing the same clothes and petting the same cat that she was petting the day she was interviewed for my news piece about my letter from the SPCA - which was March 14th, 2008) - and it's also interesting that today they're giving her the title of "NS SPCA Investigations Chair" - she's not a "Spokesperson" for the NS SPCA today. For all of you who are keeping track - isn't that interesting?

Friday evening the Chronicle Herald posted an article stating what the charges are (it's interesting that so far they are only served with a summons):

PORT HAWKESBURY _ Charges have been laid against a mother and daughter in Cape Breton in connection with a highly publicized case of animal cruelty.

The charges follow the seizure last month of dozens of cats and dogs found soaked in urine and covered in their own feces.

The charges are wilfully permitting unnecessary pain and suffering to animals; having care of domestic animals and failing to provide proper care by providing food, water and shelter; allowing an animal to be in distress; and wilfully causing pain to an animal.

The two women were served with a summons Friday and are scheduled to be formally arraigned on the charges during a provincial court appearance May 21.

An animal shelter was raided Feb. 2 and 105 animals were removed.

Days later, an additional 25 animals, believed to be overflow from the shelter, were seized from a home in a Port Hawkesbury subdivision.

Several cats have been euthanized due to sickness and others continue to recover from respiratory illnesses.

Most of the cats were found in a sewage-filled basement, covered in so much fecal matter that some had to be shaved.
Posted by Joan Sinden at Friday, March 28, 2008