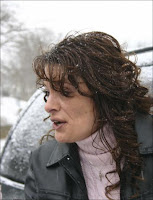 Gail Benoit was in court today - and the public finally got to see a photograph of her - which is posted here, as it was in the newspaper. So we've finally got something to tag her with, which is fabulous. We can say - "was it a woman who looked like this who sold you the sick puppy that died?" She's a lot younger than I thought she was. I thought she'd be in her 50's anyway, because some of her stories are about her poor health. It goes you show you shouldn't have pre-conceived notions about anyone.

The Chronicle Herald is really not holding anything back in their reporting of the story it seems - or maybe they are and it's really a lot more gross than what they are actually saying - it seems to be really salacious and very dirty down there in Dibgy, that's for sure.

DIGBY — A Digby County woman accused of failing to care for several puppies at her home is now also charged with assaulting an SPCA officer, obstructing police and damaging government property.

Ms. Benoit and her common-law husband, Dana Bailey, were in court Monday to get their case adjourned until February so their lawyer can have more time to examine the Crown’s evidence. The couple also face a number of animal cruelty charges stemming from raids on their Roxville home in October, when SPCA staff armed with a search warrant seized a total of 10 puppies over two days.

SPCA officials confirmed in October that tests done on the animals revealed they had an intestinal virus that could be linked to unsanitary living conditions.

RCMP officers ended up arresting Ms. Benoit on the second day of the seizures, Oct. 26, and removed her from her bungalow. They placed her in the back of a police car where she rocked back and forth and shouted obscenities while the puppies were collected. Mr. Bailey was not home.

On Monday, the couple left Digby provincial court by a side door.

Ms. Benoit walked to her mini-van behind her husband, making occasional rude gestures.

"The truth will be known in the end," she said before jumping into the van.

Several people have contacted the Nova Scotia SPCA to say they’ve purchased puppies from Ms. Benoit, and some complaints have been lodged, said SPCA special constable Sean Kelly, who was in court Monday.


Previous articles relating to this story: