But anyway - I'm sure that Maureen's pugs - Rudy and Ashley - are going to be 2 most beautiful pugs there on Sunday! They will certainly be the 2 most loved pugs anyway! They were both rescued from PEI - aren't they just the cutest things you've ever seen? 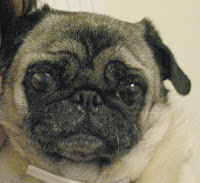 This is Ashley - Ashley is mostly blind now because of an immune reaction to vaccinations before Maureen got her - but she gets around pretty good. 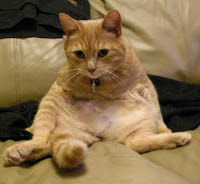 These 2 pictures are of Nacho - I think you can tell who rules the house!!

Email ThisBlogThis!Share to TwitterShare to FacebookShare to Pinterest
Labels: other people's dogs, Past Dog Events