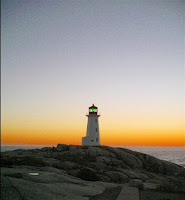 My Dad has his elderly brother and sister in town for a vacation and they've never been to Nova Scotia before - they've never really been out of the section of rural Ontario that they've spent their entire lives before, really - and tonight my Dad took them out for supper at Peggy's Cove which is a place that you have to take everyone when you're ushering visitors around when they're coming to Nova Scotia. 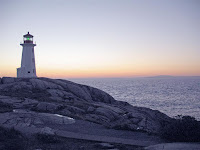 We were there right at dusk and it was amazing the amount of people there with fancy cameras taking tons of photograps - they were like little ants running around trying to get the perfect photograph. There are probably a million photos of the Peggy's Cove light house I'd imagine - and probably 1/2 million of them are almost perfect. It's pretty hard to take a bad shot of the place.