Tonight was the 4th Annual Paws for a Cause! 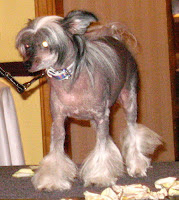 Tonight was the 4th Annual Paws for a Cause Dinner and Auction for the NS SPCA and this year was the 2nd year it was held at the Halifax Marriott Hotel down at the Waterfront. 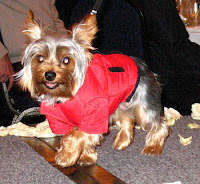 If you want to read about last year's - I wrote about it - here - on my blog post from last September. 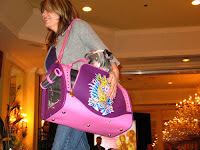 I'd say that this year was at least as big a success as last year was, and the dogs were just as cute as ever - and so were the clothes they modelled. The auction items were great, and I got myself a couple good things - including a handmade wooden pet urn that I don't know who I'll use for - maybe myself - you never know. 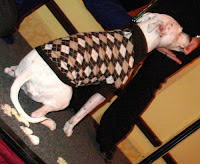 These are some of the dogs I took pictures of - I took pictures of all the dogs in the fashion show if you're interested in looking at the VERY cute photos - they're on my Google photo album at - http://picasaweb.google.com/dogkisser/SPCAPawsForACause2007

This was one of the biggest laughs of the evening - this poor guy was wearing the same sweater as one of the dog fashion participants - the pitty mix above came out wearing a brown argyle sweater - and this guy was wearing ---- a brown argyle sweater, and Neville McKay noticed him and pointed him out - and the room broke out laughing! Poor guy, eh? He'd better go to Naughty Dog and Glamour Puss and buy one of these sweaters for his dog though so that when they go out - they'll match!

Here's a slideshow of tonight's event if you don't feel like going to the Google photo album: 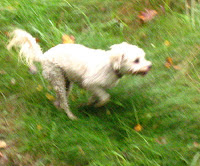 Before the auction today me and the dogs had a good time in the woods - Buttercup was on fire running around everywhere - it was hard to get a photo of her she was running around so much. 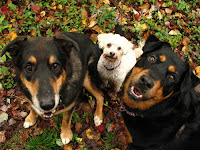 I DID manage to get some super photos of them with all 3 of them in the same shot. There's certain parts of the walk where we always stop and have a treat - and I was giving them a treat and I noticed - oh my dog, they're standing all squished up - where's my camera! And I got this shot. Serendipity is great.

These 2 photos are adding to my ever growing collection of photos of Buttercup running towards me - I think I must be up to over 60 of them now. 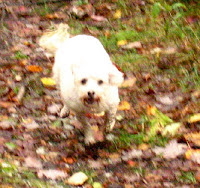