Yesterday me and my family - sans dogs - went to Peggy's Cove. It was horribly foggy - which actually doesn't happen all the time, but we had a good time anyway. I had a good time in the gift store - they've got some nice stuff in there, and there's some other good stores in Peggy's Cove too - some nice artsy type stores. Peggy's Cove IS also a working fishing village - but there's also touristy type stores along the main road of the town.

Here is the stuff I bought: 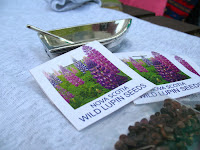 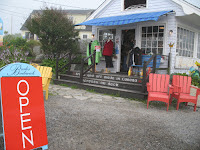 This is a sticker I bought at the Peggy's Cove Gift shop - isn't it funny? I thought it was a hoot. Unfortunately it's not made by a Nova Scotia Company - it's from Maine - but I guess it's pretty close. 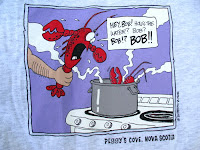 They also made the t-shirt I bought - they're called "Entertain ya Mania" - they've got the lobster comedy - DOWN! haha!

This is a picture of a duck at the same location I took the picture at the top of this post. 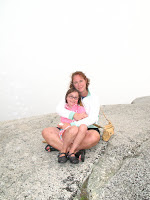 This is a picture of my beautiful niece and great niece who are visiting from Oregon - up at the rocks by the lighthouse - which is shown in the photo below. 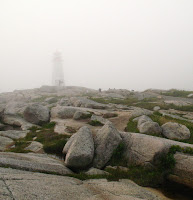