My Dog will not become a pawn 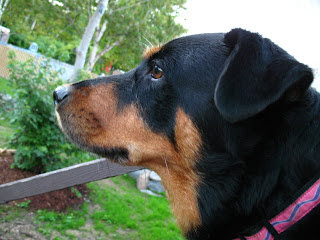 I arrived home from the Prospect Bay lobster supper tonight to find a contact notice from Animal Services saying that complaint had been made regarding my dogs. And I know exactly who's made the complaint and what it's about. It's been made by my next door neighbours and they're complaining because they are afraid of Daisy. Or that's what they're saying, anyway.

What they're REALLY unhappy about is the fact that I had a legal land survey done, had pins put in the ground and have staked out exactly where the land I own begins and ends. And the land that they've always thought they've owned is not actually their land. That's too bad for them, but that's the facts. There is about 3 feet at the edge of their property that abuts mine that is actually mine and not theiers - and they are very unhappy about that. They have actually screamed at me at the top of their lungs about it, telling me that the land survey means nothing, it's just a piece of paper, the pins are in the wrong spot - they have papers that say where the proper property line is, and they are in the right. They have owned that property for 150 years, and they very rightfully own that 3 feet of land.

The reason I had the land survey done was because I wanted to put up a fence. I wanted to fence in my back yard so I could keep my dogs safe. The people in the house that I am sure have made the complaint about me have a lot of cats - they haven't bothered to spay or neuter their cats - so they've got a lot of them running around their property - they even left a bunch of kittens in their basement last winter hoping they'd die - but unfortunately they didn't. And it's THEM who say the unfortunately part. My dogs like to chase cats - what dogs don't? And up until about a month ago my back yard had a lot of those cats living in the open rock hills - which used to drive Charlie crazy - which was another reason why I wanted the fence - to keep the cats OUT of my yard. I also wanted the fence because Daisy likes to go on walk-abouts - so I always had to have her on-leash when we were in the back-yard - and with a fence she can now be free, which is wonderful. She can now access every bit of our property. She is loving it. And she deserves it. She spent the first 3 years of her life tied on a short chain to a dog house, so she deserves freedom.

So I did the proper things in the proper order - I had a legal land survey, and I put up a fence.

And as far as my neighbours are concerned - I have committed a heinous act and taken away the land that they've owned for the last 150 years. And they've decided to strike back with the only ammunition that they know they can hurt me with - Daisy. 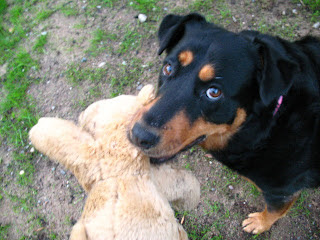 And I can tell you right now, that I am not going to let that happen. Daisy is not going to become a pawn in their land dispute.

My Father volunteered to pay any and all veterinary bills for any injuries that Daisy caused if she did hurt the dog - we told them to take the dog to the vet if Daisy had hurt their dog - they could get the dog fixed up and looked at for absolutely free - we would pay all vet bills if Daisy had in the least bit marked up their dog (in their words - tore their dogs ear off - which is an absolute lie, and that's why I'm writing it here, because that's what it is, a lie). So you would think that if the dog - who's name is KITTY - was actually hurt, even a little bit - was going to have his vet bills paid by someone else - would be taken to the vet - so that it could at least be documented.

I really wish they HAD taken him to the vet so that it COULD have been documented - that there was NO injuries. Daisy did nothing to him. Except give them a reason to make a complaint. But growling at another dog is no grounds for making a complaint to Animal Services. I can assure you of that.

But being harassed by my neighbour - having them threaten to SHOOT Daisy, now that is something I can chew on, and that I will.

Daisy is not going to become a victim in their petty land dispute simply because she is scary looking and they can say they're scared of her and afraid for the safety of their grandchildren. They should be more afraid for their unfenced pool. Or for the shot gun that they have in their house. Now THOSE are things to be afraid of. I'd be very worried about those things.

I don't know who these people are as dog owners, maybe they are very responsible dog owners - but I know for a fact none of their cats are spayed or neutered - which makes them very IRRESPONSIBLE.

I have 3 rescued dogs from the SPCA, as well as a rescued cat - that are all spayed and neutered. My dogs are registered with the city, I am a member of Maritime Animal Rescue, I am a voting, card carrying member of the Nova Scotia SPCA, I have several dog advocate websites - including this blog, I help out with local rescues and support them financially and with volunteering whenever I can - I don't know anyone who's more of a responsible dog owner than I am.

And I will NOT back down, let me tell you. These people don't know who they're messing with.
Posted by Joan Sinden at Sunday, August 19, 2007

Email ThisBlogThis!Share to TwitterShare to FacebookShare to Pinterest
Labels: BSL