Dogs in Chicago get to eat in restaurants! 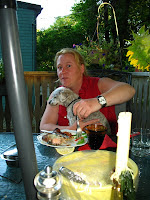 This article says some interesting things -
#1 - the city's government recognizes that there's tourist value inthe dog owning population;
#2 - the city's government recognizes that dog owners have beenbringing their dogs to the outside areas of restaurants for yearsalready and they might as well legitamize and put rules andregulations in place so that everyone is safe;
#3 - the city's government realizes that not everyone likes dogs - andthe people who don't like dogs have the ability to just get up andleave the place where the dogs are if they aren't happy. The dogowners shouldn't be affected by dog haters - they can't control thedog haters - and their tax dollars are JUST AS VALUABLE AS THE DOGHATERS TAX DOLLARS ARE.
What a fabulous city Chicago sounds like, don't you think?

Chicago dog lovers who wish to legally eat out with their pets drew astep closer to realizing that goal Wednesday as a City Councilcommittee advanced legislation allowing dogs in outdoor cafes."It's a great experience, it's part of the Chicago experience," saiddog expert Steve Dale, noting that dogs joined their owners at outdoorrestaurants for many years until the Health Department startedcracking down on the practice last year. "The majority of people inChicago have a dog [and] consider their dog a member of the family."The City Council's Committee on License and Consumer Protection onWednesday unanimously approved a proposed ordinance that would permitrestaurants to allow dogs accompanied by their owners in outdoorseating areas such as sidewalk cafes and patios.The measure will go before the full City Council on Sept. 5. Ifapproved, it would take effect Jan. 1.Aldermen said the ordinance would set regulations for a practice thatis already common in many neighborhoods. They also said it would addto Chicago's image as a good place to live while also promotingtourism."I do think that this will have a positive impact for the city ofChicago," said Ald. Brendan Reilly, who represents downtown'stourism-heavy 42nd Ward. "I am sensitive to those folks who aren'tcomfortable around dogs. I can tell you my father is scared to deathof dogs, but he also appreciates the fact that he can choose, he canvote with his feet if he doesn't want to be near them."Some aldermen were less-than enthusiastic about the ordinance but saidthat the decision is up to restaurant owners who can decide if theywant to allow dogs."It's fine by me because it's the choice of the restaurateur, it's thechoice of the patron whether he wants to go into a restaurant that'sgoing to be dog-friendly," Ald. Isaac Carothers (29th) said.Gov. Rod Blagojevich signed legislation two weeks ago enabling Chicagoto proceed with the ordinance, which had been under consideration fora year.Ald. Eugene Schulter (47th), chairman of the License Committee andco-sponsor of the proposal, said the regulations in the ordinance andrules yet to be detailed by the Health Department, such as requiringhand sanitizer at each table, will promote health and safetystandards."We are much better off having rules in place to deal with these kindsof issues than not to do anything at all and just allow for theillegal activity that's going on for a number of years," Schultersaid.Under the ordinance, restaurants would be required to obtain atwo-year, $250 license for the right to allow dogs in outdoor eatingareas. Those restaurants would have to post a notice making customersaware that dogs are permitted.The ordinance also would require that all dogs have proof ofvaccinations and the animals would not be permitted to sit on a chair,table or counter. The dogs also would not be allowed to eat any food.In addition, on-duty employees could not touch the dogs and, ifcontact does occur, they would be required to wash their hands.Ald. Walter Burnett Jr. (27th), who co-sponsored the ordinance withSchulter, said restaurateurs know what's best for their business."You give the restaurant owner a choice," Burnett said. "And whenrestaurant owners have those choices, they know what's going to workin their area."Ald. George Cardenas (12th) said he was concerned about problems theordinance would create, such as a dog "doing his business" on arestaurant's premises. He also said he was worried that the city wasreaching a "tipping point" in how liberal it is in permitting dogs inpublic places and creating venues such as dog parks."People complain to no end in terms of what these dogs do and youcan't go to these places anymore, they're taken over by other dogs,"Cardenas said. "There's going to be a lot of problems with this lateron, I guarantee you."Ald. Freddrenna Lyle (6th) said some areas of the city havewell-behaved dogs but, in lower economic wards in particular, ownersdon't spend the money necessary to train their dogs to have the socialskills to go to a restaurant. She said restaurant owners know theirclientele and whether they'll want to allow dogs."I've been in Paris,and I know what it is we're trying to accomplish,"Lyle said. "Maybe it'll work, and maybe it won't."
Posted by Joan Sinden at Friday, August 31, 2007