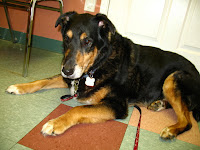 Charlie started limping on Monday - he was favouring his front left paw, and I couldn't figure out why and he wouldn't let me touch it. By yesterday he had stopped using it entirely, and I couldn't get an appointment at my own vet until this afternoon (Wednesday afternoon) - so last night we went over to the Metro Animal Emergency clinic so they could have a look at him. 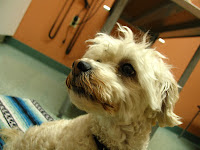 It turned out he had some soft tissue injury to a couple of his toes - but they also took some xrays of his left elbow and shoulder and they found out that he has elbow dysplasia happening in his left elbow, which is very bad news for him. He's also been acting really stiff in his back end too, lately - which means that he's probably also got hip dysplasia happening in his back hips too - so he's probably got arthritis creeping in in all his joints. Poor Charlie. He's only 9 years old. 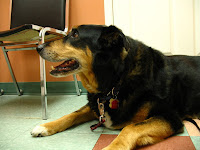 He's always had a high tolerance for pain, so he doesn't show when he's in pain - but the last little while - he's been showing that he's feeling very uncomfortable - I've been trying to get the dogs out more because Dilly is just so full of beans, and I guess that Charlie is paying the price. 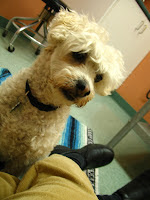 So now $400 later Charlie had a nice big dose of pain medication and a prescription for Metacam and he's feeling much better a day later. He'll now be on Metacam for the rest of his life at this point - he'd already been on glucosamine for a long time. He's also now on Seacure - I've been giving that to Buttercup - but now Charlie will also be getting the predigested contents of white fish stomach's too! It's supposed to be a miracle life rejuvanator - I've seen it's results on another dog - hopefully it will work for them too!
Posted by Joan Sinden at Wednesday, May 23, 2007