Dilly is such a good boy The main reason Dilly was returned to me and his rescuer last weekend was because he had "lunged" at 2 men while he was being walked by the person who had adopted him - so today I took him downtown to try and recreate the situation and see what had triggered him and see what his problems with "men" are and why he was lunging at strangers and see what I could do to help him with some behavioural intervention and counter conditioning. 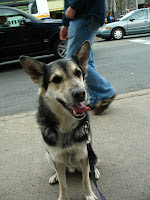 The problem soon becamse obvious that there's nothing wrong with him. I had him on a really tight heel, a loose heel, he encountered all kinds of people, joggers, bicycles, other dogs, men with hats on, we even stopped and talked to strangers - an old man stopped to talk to us, we stopped and sniffed noses with 3 separate groups of dogs, there was 2 different music buskers we walked by - everything was bustling downtown and he didn't have any problem with any of it 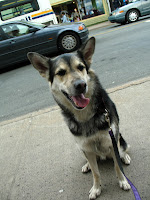 He in fact seemed to be having a great time. So I don't know what his problem was with his earlier adopter. I was completely unable to recreate it. He is a great dog - his biggest problem is that he is extremely high energy - like a lot of husky/shepherd mixes are - but if you go into that kind of dog with your eyes open, then there's no problem. 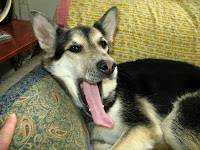 After 2 strenuous exercise sessions today - Dilly is pooped, and so is his pacing and whining behaviours - which is probably why he was really returned. 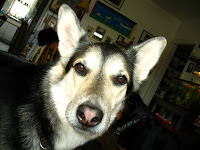 He IS going to be a great dog for the right person - he is a super snuggler who wants nothing more than to be touching me at all times when I'm at home, he has a 100% recall when he's off-leash, he loves lots of exercise and is crazy about the ball, he's just an overall great dog
Posted by Joan Sinden at Friday, May 04, 2007