Charlie Loves Halifax Gets a plug in the Daily News!

The Halifax Daily News News paper puts out a supplement that goes into people's mailboxes throughout the city every week - the one I get here in Spryfield is called the "Halifax Clayton Park Weekly News" and there's a regular pet column in there called "Pet Corner" - and this week she mentioned my website! That always thrills me because my site is all done through word of mouth and isn't commercial at all - so for it to get mentioned in a column might introduce it to some new people. So that is neat.

One of my goal's and objectives for 2007 is to work on the site and get it all updated - I have been woefully ignoring it lately - but I really need to get back to it and spend some quality time and some new content on it. I've got a million ideas, but for some reason only so many seconds in a day - and a lot of those seconds need to be spent lying on the floor scratching one or another dog's belly. That's a lot easier to do than staring at a computer screen! 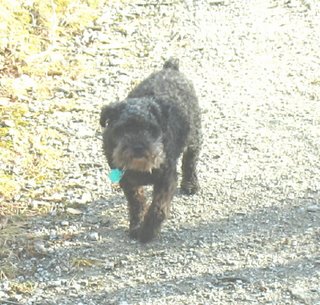 On another note - poor Teddy has an appointment at the vet tomorrow morning - he's been limping and acting like the world is collapsing around him - and looking to bite any part of my body that he can to ease his discomfort (because that seems to help him SO much for some reason whenever he's in pain!) - so I don't know what's wrong with him. Hopefully Dr. Lindsay will be able to intuit something that I can't. Hopefully I'll be able to talk her into giving him an xray of his back legs. He's been so bad I've even made him sleep on the floor the last couple nights. Which he has been VERY unhappy about, let me tell you - I've had to wear my MP3 player to bed and play it loud. Poor Teddy.
Posted by Joan Sinden at Thursday, December 28, 2006