Ticks are everywhere in the HRM 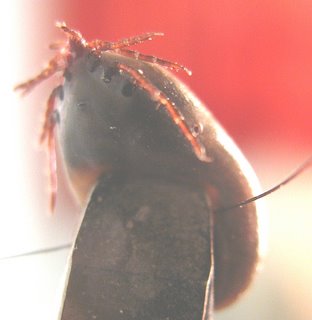 I have become consumed by ticks. Deer ticks, black legged ticks, dog ticks. Whatever kind of ticks you'd like to find. There are currently 14 species of ticks known to have made their way to this fair isle of Nova Scotia - and several of those species have made their way to the Halifax Regional Municipality - and 2 of them in particular are latching themselves onto our dear canine life companions.

The good news is that lyme disease has only been found in one small sampling of the dreaded insect - out in a small spot in Bedford. So that's good - but Andrew Hebda says it's just a matter of time until it spreads everywhere - scientists are just so truthful, aren't they?

I went and visited Andrew Hebda at the Nova Scotia Museum of Natural History for about an hour today and we gleefully went through a couple power point presentations and several scientific manuals about all the different kind of ticks there are, and he showed me actual samples of dead ticks and we both had a really good time just gushing about ticks. It was really fascinating. And horrifying at the same time. Yuck. But at least I know for sure now that it's actually ticks I'm pulling off of poor Charlie and Daisy - which is bad news for all the dog owners in the HRM.

Last night I made a new page on the Charlie loves Halifax website that gives instructions on what to do when you find a tick and who to send it to - because the entomologists of the province are trying to track all the ticks as people find them. Mr Hebda said that it's mostly birds who bring them in, and also dogs who've been camping with their owners and then come back into the city. Damn people out having fun! How dare they? haha!
Posted by Joan Sinden at Thursday, November 16, 2006