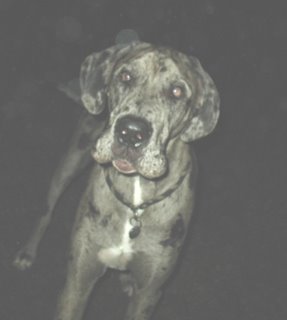 Tonight when we were slogging around Seaview 2 huge great danes showed up - Drea and Thor were their names - and Daisy had no idea what to do about them! There were 2 little pit bulls there - Tony and Rocky - and Rocky kept trying to hump Drea for some reason, but Daisy just kept pacing around them and barking. It was as if Daisy had finally met her match - she had finally met someone of the canine species that she did not feel comfortable trying to pin down, and she was not happy about it! But there wasn't anything she could do because they were so huge - so what she was going to do was just maintain a perimeter of about 12 feet and just howl at them. I don't know why dogs are so insecure. 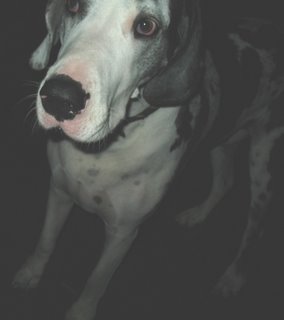 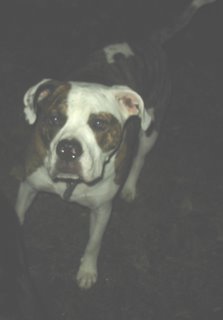 We also saw the beautiful dog Casey - isn't Casey beautiful? He's the most well mannered 88 pound amstaff, boxer....shit, I forget what else is in him - but there's something else in him too. His mom was pure amstaff (Lady who was a Seaview regular) and his Dad was ....shit I'm having a brain fart about his name too.... but he was a Seaview regular too. Another one of those "wanting to have a litter so they could have puppies because they were such nice dogs thingee. Casey turned out nice though.
Posted by Joan Sinden at Thursday, November 16, 2006