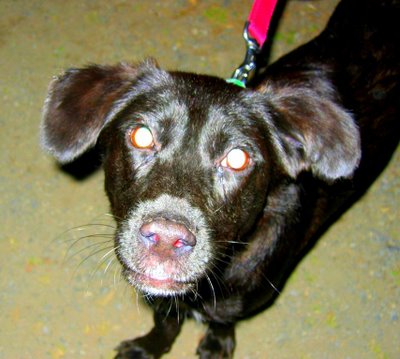 I first met Mitzi at Seaview Park a couple years ago. She blended in perfectly with the crowd there - chasing after whatever ball was being thrown, trying to steal whomever's ball was on the ground and in play. She was the perfect, well-adjusted floppy eared black dog that is the back bone of every dog park in every city. Mitzi had 2 things that made her stand out though - the end of her tail was completely bald, and her owner was a big teddy bear that all the girls secretly were keeping an eye on out of the corner's of their eyes.

I actually have more pictures of Mitzi's Dad than Mitzi because at the time I met them all the ladies on NSDogs wanted to know about this guy who was saving dogs down in Cape Breton - so I was surrepticiously taking pictures of him at Seaview to fill their curiosity. Luckily for him though he was too young for most of us!

On the morning of November 28 - this past Tuesday, Marc woke up in the morning to find that Mitzi had died at some point through the night. She was only 3 years old. She'd had some kind of intestinal thing go wrong that he'd had no idea about. All her life she'd had skin problems - hence the naked tail. He'd taken her to PEI, various vets, holistic practicioners, anything you could think of - and then finally he and Mitzi had made peace with the fact that she was going to have a bald tail. She had fixed the rest of her body's skin problems - it was just the end of her tail that was beautifully bald. And that's what made her special anyway - I'm sure that if you met Mitzi and Marc you could see them from a few hundred feet away just from her tail. She was a one-in-a-million dog.

3 years isn't nearly enough time to have shared what she had to give Marc and the rest of us - but we don't have any say in the matter sometimes, do we? Life really is too short, and it is all equally precious.

Marc had a website where he put pictures that he'd taken of Mitzi - from when she was a puppy, right up until the end of August this year - it shows the width and breadth of how much one dog really can be loved. It's at http://www.black-phantom.net/~marc/mitzi/

He also sent me an email that he thought would be okay to share:

Yesterday morning I awoke to find that my beloved Mitzi had passed away
during the night. Dr. Carnegy determined that the cause of death was a
"hole" near her small intestine through which part of the intestine had
passed and become twisted, cutting off her circulation. He has only
seen three cases of this in his thirty years as a vet and said that he
had only ever discovered it after the dog had died. In the last hours I
spent with Mitzi I could tell that something was wrong, but she was calm
and apparently not in any pain. The last time I saw her alive was at
the foot of my bed before I went to sleep. In the morning I found her
downstairs in her donut bed by my computer desk, where we spend a great
deal of time. Mitzi was an amazing companion and our bond was stong.
To say I loved that dog is a gross understatement. Everyone who met
Mizti loved her and people always commented on her big beautiful eyes.

Everyone who goes to Long Lake and Seaview are going to notice a big hole, Marc - please accept our sincere condolences.
Posted by Joan Sinden at Wednesday, November 29, 2006