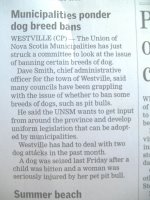 I'm going to have a LOT more to say about this in the next little while - I just wanted to give a heads-up about this, that there's been articles in the news about this the last couple of days - in case anyone who reads my blog for some reason doesn't read the newspaper! This news clipping to the left didn't appear anywhere in the online edition of today's Chronicle Herald for instance - so it could very easily have been missed by anyone not closely watching. And it's a doozy of an article.

And a lot of people do NOT know that the most esteemed Lloyd Hines - the Warden of the district of the municipality of Guysborough - the same fellow who has been trying to KILL Zeus and Sandy - the 2 dogs who are the dogs that the Dog Legislation council of Canada has been working so hard to save up in Guysborough County for the last couple of years - is the warden of his Municipality - but he is ALSO at the helm of the Union of Nova Scotia Municipalities - so it makes sense that he is now trying to get the same legislation that he has in his fiefdom - passed province wide. He has always let it be known that it's been his dream to have that same legislation passed province wide. Well I'd like to publicly state here that - we have got to STOP THAT FROM HAPPENING. And we most certainly WILL. Without a doubt. Monsieur Lloyd Hines does not know what constituents live outside his municipality - but it includes people like ME. Dog loving, dog-kissing TAX PAYERS like me. So it's not going to happen. What did Charlton Heston say about his guns? That you'd have to pry them from his "cold, dead hands"? Well - you will have to take away my dog-owner rights away from my "cold, dead hands" in the same manner - pryed with a crow bar in a most in-elegant manner - in full view of a news camera!
Posted by Joan Sinden at Wednesday, August 30, 2006