I heard today that someone whi is on the Long Lake Advisory Committee is trying to have dogs banned altogether from Long Lake here in Halifax. Well, let me tell you. I have something to say about that.

#1 is that Long Lake is a provincial park. Dogs are allowed in provincial parks, as long as they're on leash - so unless this person has the designation of Long Lake Provincial Park changed or signed over to the city so that it's no longer under the province's auspices - dogs are going to be allowed. Why should one park in the province be any different than any other? What makes this park so special?

I hear this person is saying it's because they've found "fecal levels in the water to be very high" - I suppose the fecal matter is dog shit? What about squirrel shit? I've always been concerned about all the squirrel shit and squirrel piss down at Point Pleasant Park - I meank, where DOES that stuff go, I mean - that can't be good for the environment either. And another thing that I am very personally worried about is the Halifax Harbour - did you know that ALL of the human waste from the Halifax Regional Municipality currently is dumped there? Well I'd like to see that stopped! So what I think should happen is we shouldn't let any humans come into the city anymore so that they can take dumps without cleaning up after themselves and not carting it out with them when they leave - that way the harbour will stay nice and clean! But that's not going to happen, and do you know why? Because joe blow in the HRM isn't going to be BULLIED.

Dog owners have allowed themselves to be bullied and pushed around by dog haters in this city - and I say we put a stop to it right now. There is enough space for everyone. Dog haters AND dog lovers. If one person on the Long Lake Advisory Committee is trying to bully the rest of the committee to have all dogs banned from the Park - I say we push a little, and bully back. And stand up for our rights. Our dogs' feet are the same as our feet - they just don't happen to be covered in dead animals (leather) like ours' are, which is probably more environmentally friendly anyway.

Okay, now I'm all excited and angry. Another reason why dogs cannot be banned from Long Lake is because - who are the major users of Long Lake? Duh........ dog owners! So if you ban dogs from the Park - you are going to have a riot on your hand. And that's all I'm going to say about that, because I'll have a heart attack if I continue on with that subject.

The thing is - there are some people who are trying to take tracts of land like Long Lake Provincial Park and take it back to some prehistoric time when people weren't actually inhabiting this part of the world. Well I have news for these people - there are people living on all 4 sides of Long Lake now - and they want to use all sections of the park - and the park cannot have too many deer or moose or bears in it, because it's not safe for the deer or moose or bears to live in there! And it can't have too many messy bogs or unsafe foresty type stuff in there either or else people are going to get hurt and what's that going to do to our health system if everytime people go in there they're coming out with broken legs. I mean, who was this great advertising executive who came up with the slogan "Parks are for people" - and then another person decided that they wanted to just put a conveyour belt into these same parks that we had to step on when we entered that was 6 inches wide and we could only stand on that as it wound through the park and we could look at the flora and fauna - but we couldn't actually step off it or we'd cause chaos to the "pre-acadian forest" that the "Management committee" were trying to "save and build for future generations".

Try that up in Enfield or Cape Breton - but you're NOT going to get that in Spryfield. I'm mean - PLEASE!!

I will also say here though - that Long Lake is never going to be an off-leash park either! So forget about that too! Being a provincial park like I said before - Provincial Parks are on-leash spaces! So let's just accept that and move on! There's enough space at Long Lake for all of us. If you want to know where no one goes at Long Lake (I mean where none of the bullet head dog haters go who kick up a stink when they see your beautiful canine life companions not tethered to your body in some manner) - email me and I'll hook you up! End of story!

Here's some pictures that I took today at Long Lake - aren't they beautiful? And don't the dogs look happy? It's an awesome spot. And not an ounce of fecal matter to be found. Actually, it's still sitting out in my car.... I better go get it and put it in the trash - I bet it's making a hell of a stink. It's damn hot out today! Yuck! 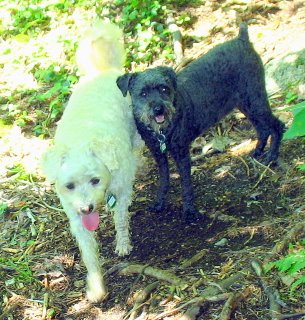 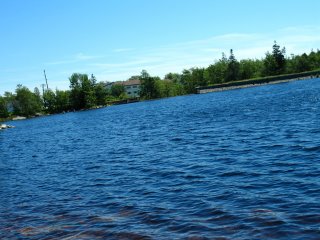 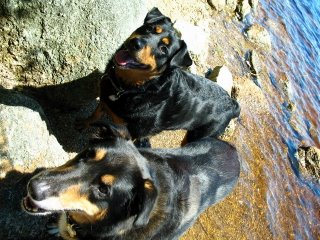 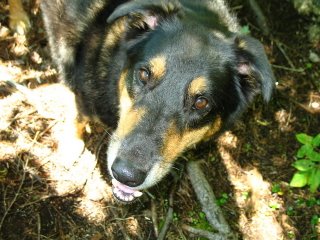