I Think I've Figured Why Charlie's Been Unhappy 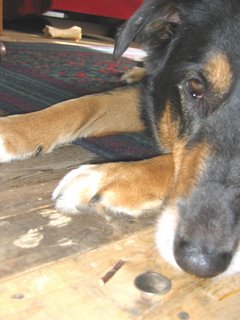 So Charlie just hasn't seemed himself the last couple weeks - I thought he'd gotten into something that had wheat in it because he's allergic to wheat and when he's had some the first thing that happens is that he becomes extra barky and he'll just generally be on edge, when he's usually the most happy-go-lucky soulful being you'll ever meet. The second thing that happens is that sores will break out on his haunches - and that's what I've been waiting to happen - and they hadn't been coming out and I was starting to get confused. But something else he'd begun doing which was perplexing me was that when he yawned his teeth would chatter at the end, which I was finding very yawn. But other than that you couldn't tell there was anything wrong - he did have a slight limp that came on and off - but he's got a bum shoulder that he's had all his life that's caused by some ligament injury he had when he was really young - so I figured he must have been jumping around extra hard in the woods.

Until yesterday when he was coming in from his morning pee and I saw him stop to chew on his front left paw - and I knew he had something stuck in there - so when he came in I grabbed it and felt, and what I did I feel but something stuck there for sure, and when I tugged it it did NOT want to come out. And I tugged it really hard and Charlie mouthed at me that - "that really hurts Mom, stop it!" - but I kept pulling, and finally it came out - and it was a piece of stick that was over 1 inch long that was stuck straight up between his pads! Straight up into his front left foot. That poor dog, and it's been there awhile - because I go over all the dogs all the time and a couple weeks ago I was feeling his paws and I felt something and he pulled away and I thought to myself - "I've got to go back and look at that spot" - and then I forgot - until yesterday.

That dog defines stoicism. And if you don't know what that means - just like vitriol - go to Dictionary.com and look it up. He once had a thumb tack stuck in one of his pads and continued to walk without flinching too bad. Charlie is a true trooper. Which isn't a good thing because if he does get sick I'll have to find some other way than HIM telling me he's sick.

On another health related note - Daisy got a TICK from our walk at Prospect Bay on Friday! I was totally grossed out when I found it Saturday night. I didn't know what to do. It was in her neck and it was well and good stuck in and sucking blood. I called my parents, I called and left messages with a couple people - I searched the internet, and then I took a pair of tweezers and some hydrogen peroxide and tugged and it until he very un-obligingly came out - and then I flushed him down the toilet - after I wished that he had better luck in his next life. I couldn't believe it. At first I thought it was a big floppy mole. I had never seen one before in my life. I hope I never see one again - bugs gross me out. Yuck. I am not going to take any more pictures under any more bonsai trees - that's for sure! 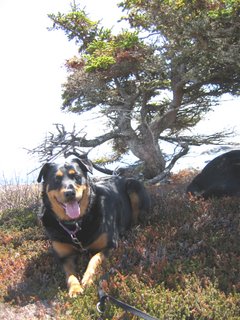