Today was the Nova Scotia portion of the Banned-Aid-Coalitions Bully Bowl-a-thon. It was over in Dartmouth and was put on by the Dog Legislation Council of Canada. My team was sponsored by "PAWS4Health Enterprises" and we called our selves - "Us Terriers are Bowling for the PAWS-A-Bull-ities!" - and I made us up t-shirts with one of the team members dogs on it. I also made up t-shirts for one of the other teams - so it was a colourful day.

The DLCC raised almost $6,000 today for the legal challenge to end the pit bull ban up in Ontario - which is absolutely awesome I think! Let's see how much Ontario can raise next week when they hold their bowl-a-thons! 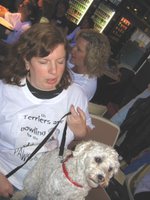 One amazing thing about today was the fact that Buttercup ran out of the house as I was leaving and jumped into the car and dog-damned it if she would let me get her out. So I had to take her with me to the bowl-a-thon with me. For the first 2 rounds I left her in the car, and when we took a break I went out and let her out for a pee, and once again - she wouldn't get back in that fan-damn car. So I bundled her up in a blanket, went into the bowling alley and told my team mates that I had to go because Buttercup was telling me it was time to go home. As I was leaving the bowling alley manager and owner were at the door and they saw Buttercup's nose under the blanket and they started cooing and said - "we bring our dogs in here all the time!" "If you have a leash and you want to stay - go ahead"! So can you believe that? A dog-friendly bowling alley! I was in 7th heaven! Further proof that the world down here in Nova Scotia really is Shang-ri-la! Yea! And to top it off we were at a dog function!

So Buttercup got to go bowling! I think she knew all along that she was going to be making a strike for all dogs everywhere today! 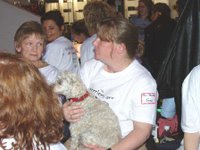 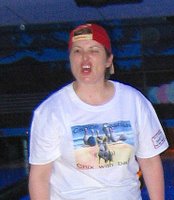 One of the organizers of today's event - Janet Chernin, lamenting the fact that she spent all the past week making herself pretty and getting sponsors - rather than practicing her bowling technique! haha! 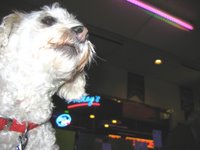 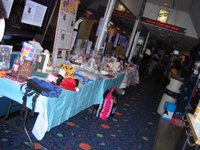 They also had the most amazing things up for silent auction - and a note to all you people up in Ontario - if they have the Zeus print for auction - make sure you put a bid in, because it's GORGEOUS. They even had free food.

The DLCC really knows how to put on a shin-dig. And I have to give a kudos to Lisa Davis who won the 50/50 draw - it's always neat when the person who wins that donates their cut back to the charity - and in this case it was $91.00 - which is a lot of money. I wouldn't have done it, I would've driven straight down the road and spent it all at the Moir's chocolate factory! 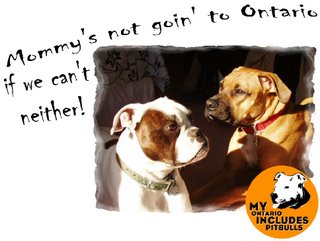 This is the graphic I made for the back of Lisa's shirt who has Duncan, Delta and Oscar - I really liked it and think it says everything that needs to be said!
Posted by Joan Sinden at Saturday, May 06, 2006