This past Saturday I went to the Greyhound Pets of Atlantic Canada's (GPAC) yearly auction that was held at the Colby Ale House over in Dartmouth. From their website they said that they raised more than $4,000 - which Scotiabank said they'd match - which means they raised more than $8,000, which is awesome! The food was really good too. I haven't had spatzel - a german noodle - since my husband stopped cooking for me, and it was yummy. I heard the Colby Ale House is getting well known for their german food, and it seems well deserved. Greyhound people really ARE nuts for dressing their dogs up in warm clothes though - they auctioned off a ton of funny looking clothes that would NOT fit any of my dogs, that's for sure! haha! But that just shows you that there are dog lovers in many different places. They DID have some beautiful collars though that I was drooling over, if only they were a few inches longer or a few inches smaller - but perfect for someone else's dog I'm sure!! 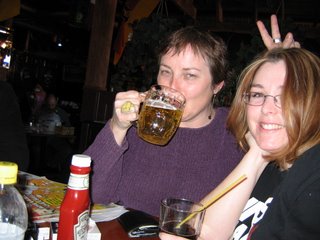 These are my friends Janet - who is the vice president of the Dog Legislation Council of Canada and owner of the local doggie day Care "Canine Casbah" and Lisa - who has the very pretty dogs Delta and Oscar who you see from time to time here on the blog. They were the successful bidders on several items. 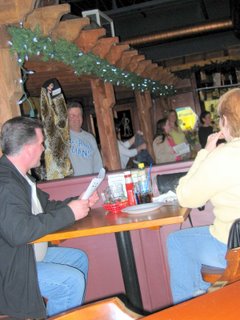 This is Harv Stewart - local radio celebrity from Q104 - and Lisa Blackburn is in the background - she was the mc for the day.

Coming up this weekend (April 29th) is the annual General Meeting for the Nova Scotia SPCA - which should be interesting! All the new board members are going to be voted in - and I made sure that I bought my membership on time so that I'll have a vote on who gets in. I'll be loud mouth #257. haha!

And then NEXT weekend (May 6th) is the Bully bowl-a-thon over in Dartmouth in support for the legal challenge in Ontario. If you see me in person, prepare to be hit up for a looney or two because I'm bowling!! It's being put on by the Dog Legislation Council of Canada - among other organizations - in support of the legal challenge to overturn the pit bull ban in Ontario - so everyone should throw in a buck or two!
Posted by Joan Sinden at Friday, April 28, 2006