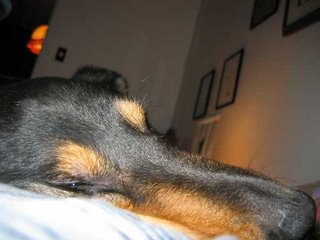 Temperament tests and shelters and no kill shelters and the people who work there are one of my big bug-a-boos. I could really go on (or go off if you will) about it - ad nauseum. And on one of the many email lists I belong to this week the topic came up. So my mind has been tossing and turning on the topic the last couple of days - especially since the people who have been posting about it have given me such delicious ideas to think about. Oh boy, have they. And it's made my blood pressure go through the roof because I own and have had many dogs come through my doors that would die very quickly if they were to come under the auspices of these "shelter" managers.

I have not posted what my thoughts are to the group because there's no way that I can say what I think and not have them absolutely hate me because I don't know that what I'm going to say is something that they can understand - they're too close to the fire, so to speak. But let me give you an example of what they say in their emails -

This is a paraphrase of the conversations going on

They say they're too busy to talk about the type of temperament tests that they do because they're out there "have been so busy trying to SAVE SOME ANIMALS!!!" But in the next paragraph they go on to say "their shelter does temperment tests on every dog that comes in...and that...families want a companion that they can enjoy without fear of being bit..and shelters are trying to place the best dogs without fear anything bad happening......their shelter NEVER NEVER NEVER places a dog that has any agression issues...whether it be food bowl or otherwise. And they won't apologize for that fact.

I could write a book based on that paragraph.

I can only thank my luckly stars that none of my canine life companions ended up in your regional municipality. That's for sure.

Although I do have to tell you that the picture attached to this post - that lovely, one of a kind, most soulful,loving, amazing, once-in-a-lifetime dog - who is now named Brody and living the life of Riley in Berwick Nova Scotia passed his temperament test with flying colours yet was stilled deemed unadoptable and was going to be killed because the shelter manager "didn't like the look in his eyes". For weeks after I brought him home every time I looked in his eyes and saw how deep they were I'd start crying because I'd think to myself - "you should be dead right now, and for what reason! No good reason whatsoever!"

Thank dog for both of us and one lucky family in Berwick that fate intervened.

I DID write a post about temperament testing to the group though - a post that lots of excellent links to great information - one that I'm sure none of the people who SHOULD read the information, WILL. This was the stuff that I sent them:

I am so happy that we are talking about temperament testing - I know that we've talked about it here on *** before and it's something that a lot of us have very strong feelings about, so it's no surprise that it's causing a lot of conversation. I think that when we talked about it before it was prior to when *** joined us - so she didn't get the benefit of all the shouting we did about it back then.

There is a ton of stuff on the internet that is absolutely fabulous (in my opinion) about temperament testing - and who am I to talk about it anyway - except to say that I am just a normal dog owner who would be the beneficiary of a temperament test that is used well, or a temperament test that is used inappropriately by a shelter and adopts an aggressive dog - thinking they are getting a dog with no issues - but I like to think that I'm a little more savvy than that, in that I've adopted dogs who have been deemed unadoptable by "temperament testing" standards and we've all lived to tell the tale and the dogs are blissful and I'm happy and the eventual new homes they go to are happy and everything works out dee-lovely.

I hope #1 you will forgive the face that this is going to be a long email because I'm going to give you everything I have all in one email - I am going to give you what I consider to be the gold standard for information regarding EXCELLENT information about temperament testing that is solid, shows both sides and also gives you ideas on how to accurately assess the animals coming into your facility so that you can give adopters healthy dogs.

#1 is the fact that a temperament test should NEVER be used to determine the life or death of a dog. That is the most grave mistake that you made with ***. I am so sorry to say that if that is what happened in *** - if that's what happpened - if you killed her simply because she failed a temperament test - that is a grievous
error that has been made. In the 21st century that is completely unnecessary. Sue Sternberg might send you a letter of congratulation - but the rest of the sheltering community will most certainly not be happy. You have mis-used the spirit of the plastic hand if you killed her because of that. Although that is what Sue Sternberg would WANT you to do. She WANTS to kill any dog that has any kind of issues. She says that if you've got 20 dogs coming in and you've only got space for 15 - you've got to find some reason to kill 5 dogs - well, there's your reason!

But anyway. I am going to give you some links to articles that are super.


http://www.bestfriends.org/mercy.pdf - this document is the basis upon which the "no-kill shelter" movement was built upon. It states the simple fact that shelters need to start "sheltering" animals and stop "killing" animals - and to stop pretending that they're doing it in the name of mercy. It is an absolutely unbelievably eye-opening read. The fact that it's on the bestfriends.org website certainly says something.

Another pdf file on the bestfriends.org site from my hero Nathan Winograd that sums up everything I believe is called "Temperament testing in the age of No Kill" - and it's at http://www.bestfriends.orgwinogradtemptesting.pdf

I also have a few articles that I've archived on my "blog" that are super about temperament testing. They are at:

"Temperament testing: Shelter Respect - one Canine at at time" - at http://temperament-testing-shelter-respect.html

An article that was in BARK magazine that is SUPER that compares the different temperament testing methods: "Dog is in the Details" - http://article-comparing-temperment-testers.html

An article written by the vice President by the ASPCA about temperament testing -
http://temperament-testing-stress-in-shelter.html