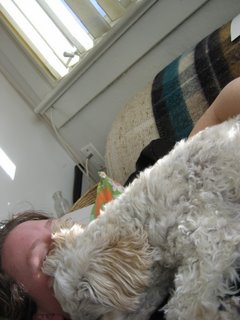 I had a bad migraine today. When I first found Buttercup my animal communicator friend Maggie Carruthers felt that Buttercup had come into my life to help with my migraines - they have been an all-consuming part of my life for many years and I take a ton of prophylactic drugs that would knock the socks off a horse, but somehow - mixed with my brain chemistry make me able to live day to day with only a few days a month contemplating the reason why anyone on this earth would want to be here at all.

I've always interpreted Maggie's idea as Buttercup making my headaches better - as in making them go away - because that is what I want them to do. But today it occurred to me that that's not what she's here for at all - she's here to make them bearable - to give me something outside of myself to focus on. When I am sick she absolutely will not leave me. When I was in Toronto last year I had a super bad headache and was throwing up and making a hell of a scene at my sister's house and Buttercup wouldn't even leave me to go pee. I don't know who my sister was more worried about - me or Buttercup! Secretly I think she might've been more worried about Buttercup because my headache went on for like 24 hours and the dog wouldn't pee or eat or anything.

But today it really hit home as I was moving from the bed to the couch to the bed to the couch and she was moving with me each time and each time she'd climb up on my chest and put her head in the crook of my neck that she was BEING THERE for me. It did nothing for the headache, or the nausea - but it gave me comfort knowing that she was there and something to focus on. She really is one exceptional little soul mate.

And then tonight I was able to drag myself into the car and go to Seaview and she barked like hell at every tree and every gay man in every bush and was bad as hell. And now she's sleeping like an angel in front of me in front of the computer monitor. It was probably a good day for her.
Posted by Joan Sinden at Monday, March 13, 2006