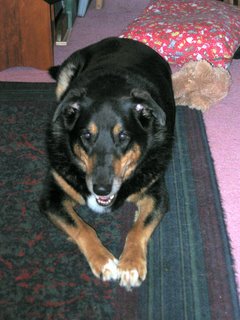 Today, I was just reading the blog - "Caveat" - it's a Canadian political dog blog that I've got a link on the side of this blog in my links section to - and the post talked about how "traditional animal husbandry practices are under attack in the United States" - and how the USA is now up to a total of FIFTY-SIX different breeds of dogs being banned, planned to be banned or restricted in that country. That's almost as bad as Italy! I did NOT know that the USA had gotten that bad.

But something else that places have started doing is banning dogs OVER a certain weight! Can you imagine? Fairfield, Iowa has banned any dog that weighs over 100 pounds and on a GOOD day Charlie weighs 110-115 pounds. So we can never go visit the potentially great town of Fairfield, Iowa. All because my lab/sheltie mix has a bit of a weight problem. Does that sound a tad pathetic to you? It certainly does to me!

(An interesting aside about Fairfield Iowa is that it is the home of the Maharishi University of Management - "Founded in 1971 by His Holiness Maharishi Mahesh Yogi, the Vedic sage who has introduced to the world the most ancient continuous tradition of knowledge, the Vedic tradition of enlightenment" - a university where you go study transcendental meditation and business law at the same time - but only if you have small dogs...)

Here is the list that was posted as the breeds now banned down in the USA - please don't let it creep up here into the Atlantic Canadian Provinces! Let's keep our area perfect (except for that little blight that is known as the municipality of the district of Guysborough - but that area is a universe all to itself!)