The face of a life of suffering 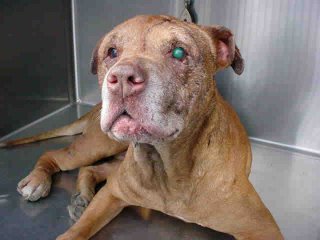 I was updating the blinddogs.com website that I maintain and I put this guy on the urgent page. He's in a kill shelter in California. When I clicked on the file to open up his picture I was shocked. What kind of a life has he had until now. Is he just going to die? Is he already dead? Is he cold? Is he suffering at this very moment? Has he been saved?

There is so much suffering in this world. Sometimes it's just so overwhelming.

ps: He doesn't have a name. What was especially scary is that he's been at the pound since February 25th and it's now the end of March. And when I did a search I found him on the internet at the Harbour City Pound at 735 Battery Street in San Pedro, CA 90731 - his picture and information - click here to go to his info (I removed the link on April 1st - see below). If I could drive to California I'd go get him - but thank your lucky stars Dad, that California is a long ways away.

Update - April 1, 2006 - the day after his information was posted on blinddogs.com he was rescued by a pit bull rescue in California - miracles do happen for old dogs sometimes. I hope he's resting in a comfortable spot at this moment and will have a few moments of peace.
Posted by Joan Sinden at Monday, March 20, 2006