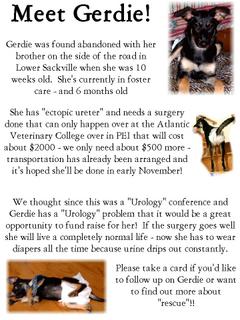 2 things came together at once - my friend Maureen Tate talked to me about a rescue dog that needed a surgery because she had a thing called "ectopic ureter" and I also happened to be marginally organize a conference where 150 nurses were coming from all across Canada for a Urology Nursing conference.

And a light bulb went off in my head - wouldn't it be a great idea if the Urology nurses learned about the rescue dog who needed a Urological surgery? Maybe they'd contribute some money to help out. I thought it was a fabulous idea.

So I asked Maureen what she thought - she thought it was a great idea - so then I asked the people who were organizing the conference and they agreed!

So this weekend - from the 13th to the 15th of October - more than 150 Urology Nurses are coming from all across Canada to Halifax, and at the registration desk is a donation jar with the poster that you see to the left.

Also with the poster are cards that the nurses can take away with them that have the lady's name who's fostering Gerdie - so that they can follow up on her surgery - and also adopt her if they feel strongly enough that they'd like to save her.

On those same cards that they can take with them I put the phrase - "If you'd like to SAVE your next companion animal rather than BUY them - go to http://www.maritimeanimalrescue.com/ - and on the other side of the card I also put the link to my website saying that "if you want to find out where to have a good time with your dog you should go to http://www.geocities.com/charlieloveshalifax/ - because I think that's as important as rescue too - once you have the dog you've got to have a LIFE with the dog too!

But anyway - I think this thing is a really neat idea - partnering with the medical community for rescue dogs - people like medical sales reps, instrumentation reps, pharmacy reps, medical assocations, even things like this conference - they all have a TON of money - it would be a really neat avenue to pursue - for them to sponsor specific dogs who need specific types of surgery - don't you think?

I'll let you know how much money we raise this weekend!
Posted by Joan Sinden at Thursday, October 13, 2005