I got several emails yesterday from people concerned about Teddy - I had uploaded the below picture with the caption below it and no description - sometimes I do that from my home pc when I know I'm going to be at a computer that I'm going to be working at that I can't upload pictures with, but I can add text to my blog - but yesterday I was too busy to get back to it - so all day the picture just sat there with no explanation, and it sort of looked like Teddy was going to meet his look-alike sister that I had for awhile - Annie, the SPCA poodle.

But I am very happy to report that from a holistic medical practicioner who also practices western medicine perspective Teddy is doing very well. It was a load off my mind! I was worried that he had something wrong with his internal organs or his ribs because he only wants to be picked up a very specific way - he positions himself very specifically - but I guess it's just because of the rough handling he's gotten in the past and not because of his internal doin's.

So all that's wrong with him physically is his absolutely rotten teeth which are going to be operated on next Wednesday by Dr. Bishop and then it's just his spirit that I'll need to continue to work on - which is what the picture below relates to - that's Maggie Carruthers - the local Animal Communicator. She's awesome and has appeared in the blog before - every time I acquire a new family member I ask Maggie to help me integrate them and help me answer questions. It always makes SUCH a difference - that's actually palpable within a few days afterward - it's like the dogs are able to relax after Maggie's been here because she's able to relate something to them that I'm not able to, which is priceless. And she also does therapeutic touch with them - which for rescue dogs who have just been through trauma is totally worth the price of admission alone! haha! 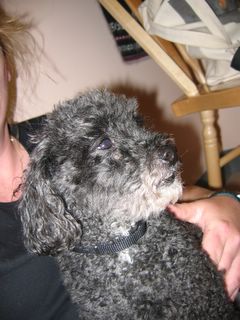 Teddy preparing to meet his maker at the vet 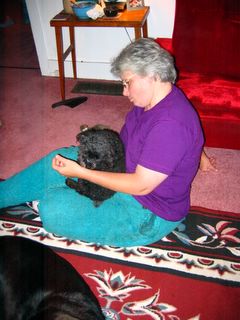