What Can I do about Katrina? 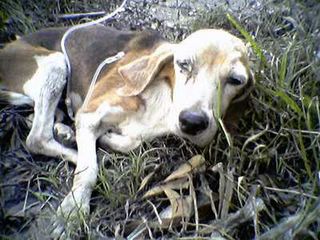 This is the face of the Katrina dogs

I get these fabulous email alerts called "Dawnwatch alerts" and one that I got yesterday had a line in it that echoed in mind - it was the idea that a large proportion of the people still left in the city of New Orleans are there because they are absolutely refusing to leave without their pets - and I believe that.

Our companion animals are to a lot of people - especially to a lot of the people who would've been left to be evacuated at the end of Katrina - are the only family that we have living with us every day. The only family who stick with us through thick and thin - perhaps the only family to have lived through the hurricane and levee break with those people - and being forced to leave them behind must have been horrific.

So there's 1000's of animals wandering around becoming dehydrated, weak, emaciated, starving, and dying where they stand. In the middle of the richest country in the world. To me that is absolutely unacceptable.

The picture at the top of this post is from a shelter who is taking in animals - that dog is expected to live - found in the knick of time. There's some other amazing stories on it's main page - including the story of a man who was refusing to leave his home because his husky had given birth the previous week and he wouldn't leave her and her puppies - even though she was so dehydrated her milk had dried up. Luckily the shelter talked him into taking them all to the shelter and now the mom is on intravenous fluids and everyone - including the man - will live.

But shit like that shouldn't be happening here. We should all be taking better care of ourselves number one - we have to take responsibility for our own lives and our animals' lives - I don't think that we should have to rely on the government to keep us alive. But at the same time we have to take responsibility for each other and take care of each other - and that includes our companion animals, and people in wheelchairs and - ugh, children. I think if everyone wasn't so much into self-preservation things would've gone a lot smoother down there.
Posted by Joan Sinden at Sunday, September 11, 2005