Today we went to Conrad's Beach...

So today Teddy got to go to Conrad's beach. He's starting to get the hang of running fast - but he still cannot understand Buttercup's body language of running towards him at top speed as a way to initiate play. Hopefully he'll get it someday. He was running at top speed quite a bit and smelling lots of stuff and peeing on lots of things - but still not rolling on anything. He's starting to seem more interested in stuff and there seems to maybe be a little bit of light coming into his eyes.

I think he's going to take a long time to get better though. He's been growling quite a bit tonight. Last night while we were sleeping he would growl quite a bit and he actually attacked me several times - I woke up with bloody hands this morning. I don't even know if he was awake when he was doing it - but he seemed to take great exception to anyone moving in the bed. Buttercup seemed quite confused by the whole thing. Tonight I'm going to take a stuffed animal into the bed with us and see if he'll bite the stuffed animal instead of my hands if he needs to attack something while we're sleeping.

Here's a couple shots from today: 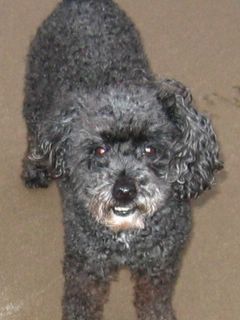 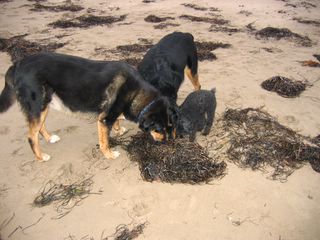 A communal smell of something deliciously stinky!