Look at what I got today!

I got a call yesterday from my friend Maureen Tate who was trying to place/foster a little toy poodle named Teddy who was looking for a new home. He's gone through a whole series of homes recently because he's a biter. She'd heard through the grapevine that I was down to 3 dogs so sent me an email to tell me about Teddy. He sounded absolutely perfect! So today I went and got him and he's absolutely adorable. A 5 pound dog who bites might die in someone else's house - but in my house I've made so many concessions for my other dogs eccentricities that Teddy's will seem pretty minor and entirely fixable. He hasn't actually growled at me since we got in the car to come home - although he did bite my father when he attempted to move his supper dish! Luckily the skin on my father's hands is about 2 inches thick and all my father said was "I guess I won't be trying to move his dish out of the corner so that he can get at it better anymore!"

Buttercup is extremely bent out of shape to have another froo froo around, but she'll get used to it - I got him partially for her - so she'll have a companion and someone to play with. And something to take the focus off of me - we are way too focused on each other - she really needs a boyfriend. So once she gets over her snit, maybe she'll recognize it's not so bad having someone her size - and actually he's quite a bit smaller than her - around.

Charlie and Daisy haven't even really paid any attention to him at all - they aren't sure whether they should be afraid of him or not - they're afraid of Buttercup - so if anything that's what they'll be of him too! haha! The big dogs afraid of the little dogs! 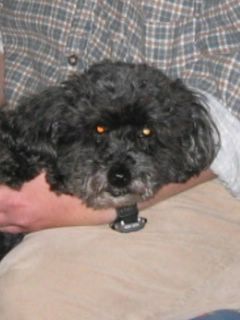 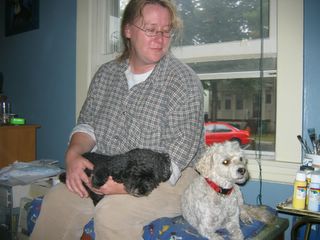 Buttercup is one pissed off dog!

Once I've had him for a couple days and he gets used to me I'm going to give his head a trim so we can see his eyes - and hopefully he'll be a bit more photogenic then!
Posted by Joan Sinden at Saturday, September 17, 2005