The Halifax Vigil for tomorrow's implementation of breed specific legislation

Well I'd say that tonight's Halifax vigil in solidarity with the dog owners of Ontario in preparation for the enactment of bill 132 was a complete success! Tons of people showed up, none of the dogs ate any humans, or any other dogs - good solid educational information was given out - lots of networking was done so that people can stay informed of things coming up in the future - and I didn't pass out at any point in my speech.

There was media there too - so hopefully they took a positive spin on it and good stories will come out from them shortly - the 11 o'clock ATV news was very positive and said that there were about 75 people in attendance - so that's a pretty good number - considering that we only started organizing the event a week ago!

I took quite a few pictures - which you can see below - and I also uploaded a bunch of pictures to one of my Yahoo photo sites at http://pg.photos.yahoo.com/ph/charlieloveshalifax/my_photos if you want to get the "full meal deal" - and see if you're in any of them! haha!

I'm also going to paste the speech below that I gave just because I'm such a megalomaniac... 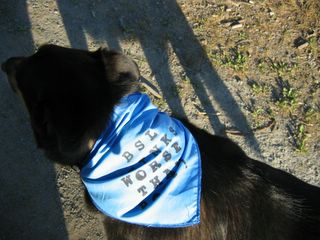 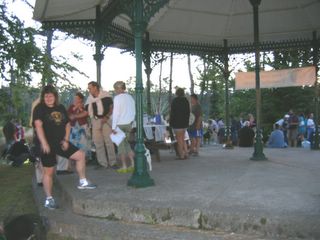 A shot of the crowd when it had started to form 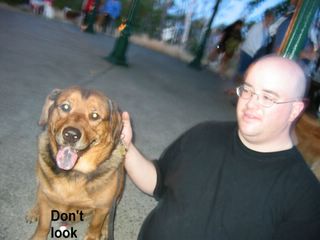 Sisko and his Dad 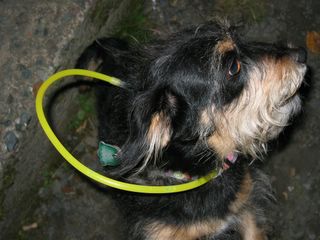 The ever perfect little Sasha! 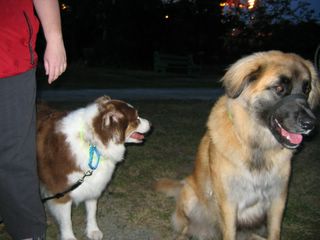 Smudge and Nellie the Leonberger

The speech that I gave...

"I’ve been thinking a lot about pit bulls in the last few days because of what’s going to happen tomorrow – and I’ve also been thinking about all the attacks that happen that you hear about in the media – that happen by pit bulls. I say that because on Friday when I told my boss and a coworker that this vigil was happening and what it was about both of them immediately squished up their faces and said – “why do you want to save any pit bulls?” – like as if it was okay to wipe the species off the face of the earth because of all the horrible things we hear on the news. That’s is ALWAYS the reaction you get whenever the word pit bull is brought up in general conversation unless the person is very dog savvy and really understands the breed for what it is.

I got involved because I think that all dogs are the same – I don’t think that there’s any difference between a poodle or a lab or a Rhodesian ridgeback or a pit bull – a pit bull just has a wider grin. The only way those breeds are different is their natural qualities and how those natural qualities are nurtured by their owners – and whether or not those qualities are used for good or for evil and the dog is loved or unloved. Whether the dog is treated as a living alive entity or a piece of lawn furniture that’s tied to a tree that becomes a ticking time bomb. There are millions of dogs in Canada and millions of dog owners – and unfortunately – millions of ideas on how those dogs should be treated…. And some of those owners think the dogs should be treated like dogs.

I’m going to assume here that I’m preaching to the converted – that everyone here loves their dogs – and are already responsible dog owners – I don’t have to convince you to become one, or convince you that dogs are good and deserving of love and a place in our family. Just being here tonight is showing that you agree with me about that – so there’s a huge amount of stuff that I don’t need to say –

One of the main goals of my website “Charlie loves Halifax” is to gain greater access for dogs and their humans to public places so that they can spend more time together – so that people can spend more time with their chosen life companions. I get emails every week from people about how important it is to them that they be allowed to have their dogs with them when they go places and how it makes their lives so much more fun and fulfilled – and with my rose coloured glasses I can envision a world that truly is dog-friendly. To at least have a Halifax that’s dog-friendly would be amazing! I want to move forward and expand that lifestyle because I thnk it will make a better world for me, my chosen lifetime canine companions and even the non-dog owners around me because of the economic and tourism benefits that it would bring in – do NOT get me started on what my perfect world looks like! Breed specific legislation is the anti-thesis of dog-friendly – it is telling people that it’s okay to be afraid of dogs, it’s okay to hate dogs, that dogs don’t deserve to be here – that just because a path of least resistance exists – it has to be taken. I find BSL to also be completely dis-respectful to all dogs because it says that some dogs aren’t welcome on this earth when my dogs have the exact same characteristics – every dog has teeth that can tear, eyes that can see ears that can hear, hearts than can beat, claws that can cut, hair that can clog up my vacuum cleaner, and legs that can knock me down when I come home from a long day at work!

I’m hoping that Ontario will be the world’s biggest experiment in breed specific legislation so that when it fails – perhaps all the 1000’s of dogs who will have been killed won’t have died completely in vain. That’s why we have to make sure that the spotlight stays on that province – that we continue to watch what’s going on up there – watch how many dogs are dying – how many dogs are being abandoned and killed in the shelters – so that hopefully once and for all the world will be able to see that BSL just does not work. That the bad guys will continue to have all the big bad dogs they want – they’ll just be cane corso’s or presa canario’s now – which are HUGE dogs that actually if they just sat on you would kill you! And the negligent owners will still be able to get dog after dog – because the current trend in legislation only targets dogs – not humans.

I personally think that the breed specific legislation fight and it’s focus on pit bulls should be separated a little bit – it really is NOT about those dogs who are attacking and killing people – it’s about your dog, it’s about my dog – and the life we live with them everyday. It’s about the quality of the life we want to have for them and WITH them. As breed specific legislation spreads because we think it’s got nothing to do with us because we don’t own pit bulls ourselves our rights as dog owners are going to be whittled away – first our off-leash parks are going to disappear, and then we won’t be able to take our on-leash dogs into any parks, we will be told how many dogs we are allowed to have – what breeds we’re allowed to have, they won’t be allowed to leave our home, in order to have any type of dog we’ll have to have a 6 foot fence – we will have to own our home, we’ll have to have liability insurance – the list will go on and on. That will all be legislated and soon no one will be able to have dogs because the cost will be prohibitive. And it’s all because we didn’t do anything RIGHT NOW.

So when the topic of breed specific legislation comes up in conversation – or when pit bulls come up when you’re talking to someone and they say that they should be banned off the face of the earth speak up! Tell people that those attacks and those dogs have nothing to do with the breed – those dogs are not pit bulls – they’re dogs who were probably never treated as family pets and are now dangerous dogs who deserve to be dealt with to the full extent of the law – as do their negligent owners. EVERY breed has dogs like that – and owners like that – dangerous dog laws would deal with it much better. It’s like I said – the only difference between pit bulls and any other dog is that their grins are a little bit wider when they smile – and I think the world could use a lot more of that!
Posted by Joan Sinden at Sunday, August 28, 2005