2 healthy german shepherds got killed because their owner went into a nursing home and no one came forward to take them so the vet euthanized them. A rescue person made a quick stab at finding a home for them but she only had a few hours to try and do something before they were due to be killed. They were down in Cape Breton and Cape Breton's only SPCA is a SUPER-high kill shelter so they would probably have died anyway if they'd have ended up there - they just wouldn't have been killed directly by the old lady. They also might not have been euthanized humanely because the Cape Breton SPCA still uses a gas machine.

I wrote a post where I said that kill shelters versus no kill shelters is a topic that I personally find fascinating and I've done quite a bit of research on it. There is an absolutely fantabulous article called "In the name of Mercy" that basically started the "no kill" movement - for better or for worse. It's at http://www.saveourstrays.com/inthe.htm if anybody's interested in reading it. It's all about what shelter workers should / could be doing about the killing problem and whether they're maybe part of the problem. We're ALL part of the problem really.

I also got my digs in about what I think about people dumping their animals into the rescue system rather than just euthanizing the animals themselves. This is what I said. You can agree or not:

I agree that the right decision was made in euthanizing them. I'm a bit funny about stuff like this. I actually think the old lady was making the right decision in putting them to sleep rather than dumping them into the rescue system for someone else to deal with. There's enough unwanted animals in the world. They could go into the rescue system and end up at a shelter that does euthanize animals and they could still end up dead but then it's someone else who has to make the decision to kill them - it's just not on her conscience - and it SHOULD be on her conscience because companion animals are a birth to death committment - however that death may come. I know that my opinion on this is a bit unorthodox because most people think that all life is sacred and should be saved at any cost but for some reason I think that life is incredibly cheap. It must be - why do we kill so many people over in places like Iraq and Saudi Arabia if it's not?
Having lived for so many years with almost daily chronic pain I wake up every morning and think that today is a good day to die - so because of that I don't put much value on life. Which is a bit odd, because I DO think that if you're living you should live every moment! And have as much fun as you possibly can - but that's because life is SO short, and SO precious - because it can be taken away at any moment - because it really doesn't have any value, because it really doesn't mean anything.

So long story short - I think the old lady should have made her own arrangements for the dog long before she found out she was going into a home - if she was old she knew something like this might happen - she was just trying to put the tough decisions on someone else. I wouldn't do it, and I'm sure most of the people on this list have made arrangements for their animals in case something happens to them. I hope those dogs have better luck in their next life.

It's funny that nobody has responded to that post... hmmm... Probably people read it and went - "what the fuck?" - okay that woman really IS crazy! 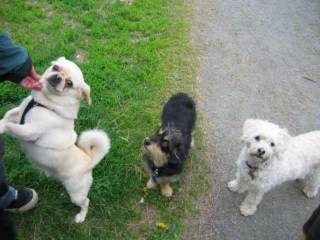 Now everyone should go hug all your animals who are still alive.
Posted by Joan Sinden at Thursday, June 24, 2004