Karin Robertson found not guilty of abusing her dogs

Well actually I don't think that's exactly what she was charged with - don't charge me with defamation for that throwaway line Karin - you're probably feeling litigous right now - the title of this post is a joke - I'm JOKING!  HAHA! We're laughing!

So I have written several, nay you could almost say I've written many - posts over the years on this blog about the justice system in this province of Nova Scotia - the place that we love to call home - the place that we choose to live in - in no small part because it is so breathtakingly beautiful and is such a great place to own a dog in - but I've got to tell you - when it comes to animal justice - we are at the rank bottom of the scale - probably in North America.

Some would say that Karin Robertson won her trial yesterday in provincial court where Judge Ronda van der Hoek decided that what Karin Robertson was saying was the truth and what the SPCA was saying was not the truth.  It's interesting because a few months earlier there was another semi-judicial hearing - an animal cruelty appeal board hearing - when Ms. Robertson had an opportunity to get her animals back while she waited for her case to move through the courts - and she was denied that option - and when that happens the animals are adopted out - so all 35 of the dogs seized from her kennel were adopted out at that time - never to be given back to her - so I'd imagine now that she'swon her case shell be suing the SPCA toute suite.

But the thing is - we were all at the Animal Cruelty Appeal Board Hearing - we all heard what was said - the conditions that she had her dogs in - we all heard it -we all know - we all know that she was in fact not keeping her dogs in sanitary safe conditions and that dogs that went into homes sometimes had life long behaviour problems - everyone knows this - why Judge Van Der Hock chose to ignore this - I wasnt at the trial - I don't know why one side was a better lawyer obviously.

And once again - that seems to be what it comes down to. 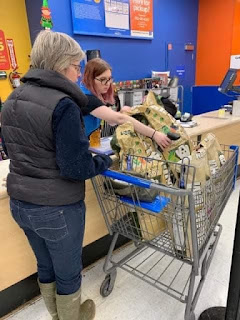 We have a lady who had for years not taken proper care of her border collies jack russels - and hey - remember when she sold two pupies to a guy, who bounced the cheque and when she wanted the puppies back said he lost the puppies?  And remember after her dogs were seized seeing a photo of her at Walmart returning dog food - used dog food - to get the money back - (picture taken January 8, 2020 and her animal cruelty appeal board hearing was December 30, 2019) now that's cold - I guess she wasn't figuring shew as going to get her dogs back from the SPCA, eh?  That was cold.

Anyhoo - so what can we do - who's to blame - where can we direct our hot blooded anger at this point?  I mean a lady got 3 months house arrest for letting her dog starve to death inside a parking garage inside Staples - and we still let this shit go on - and do you know who I think is to blame for these lax end results?

It's the crown prosecutors and judges - and mostly the judges - they do not see any value in anything that is not human - and we have to start talking about it - it's 2021 - if we see any value in our canine and feline companions - we have to start demanding it from every level of government - that Ms Robertson was found not guilty for what she was doing in Wilmot is ridiculous.  Her not guilty verdict is a symptom of our justice system in Nova Scotia and should NOT go un noticed - please don't let it go un-noticed - I'm sure all the people who now own the 35 dogs who are the survivors at the time of the raid by the SPCA would really like it if something happens beyond this.

It was NOT the NS SPCA who did something wrong in this case - which ludicrously, Judge Van Der Hock tried to make it sound (see article below) - it was Karin Robertson alone who did wrong things - and did it for years- people have known for years about her in Nova Scotia and everyone sighed for relief when she was finally raided and all her dogs were taken away - the fact that she's been found "not guilty" and is now been given carte blanche to start breeding again? I can't imagine - I hope people will do their due diligence - that'sfor sure.

Anyway - what a depressing outcome for the dogs of Nova Scotia this week - what needs to happen is that compassion training needs to happen for all justice employees in Nova Scotia - but like that is ever going to happen - especially judges - but that would be awesome - can you imagine if a judge saw that an animal was a sentient being and deserved the same justice as a living human?  Unbelieveable - what a world we'd be living in then.

In Nova Scotia right now our Justice Minister is Mark Furey - here is  his contact information - https://nslegislature.ca/members/profiles/mark-furey - if you really want to get busy - we have a new premier who is looking to our next election - I think it'd really be nice to put animals on the next election - so Iain Rankin - his contact information is here - https://premier.novascotia.ca/ - animals really do deserve more than what our justice system here in Nova Scotia have given them - and while you're talking to these two individuals - bring up Snoopy - he really needs to come home.  Thanks.

Here is what an article desribing the Animal Cruelty Appeal Board last December looked like: