Robert Hunt: President of the Board of the Directors of New Brunswick SPCA, Candidate for Provincial Liberals, secret pit bull hater 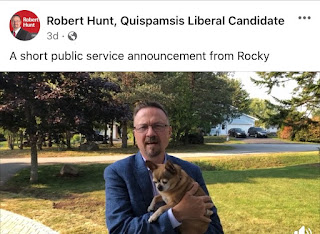 So this is not a pleasant post to write.  Why would anyone get involved with animal advocacy at such a high position as President of the Board of Directors of the New Brunsick SPCA and secretly want to see pit bull type dogs exterminated from the face of the earth?
I suppose it makes sense in some ways - it would allow you to move forward if you had any untoward agendas, that's for sure.
I came into contact with Mr Robert Hunt in June, 2020 after the tragic and untimely death of Megan Milner when she was killed by one of her American bully dogs - dogs who aren't actually pit bulls - American bullies are bred to be companion animals - although it is quite unfortunate that the breeder that Ms Milner got her dogs from appears to have been breeding entirely for looks and not for personality or for gentleness.

That has nothing to do with Mr Hunt's opinions on the pit bull type dog though - and he has quite strong opinions on them.
When you are the President of the Board of Directors of an organization for the prevention of cruelty to animals - you'd assume they'd want to protect all animals - and not just some of them.  I guess he is taking a page from the rule book of Ingrid Newkirk - who would also like to see pit bull type dogs exterminated from the earth.
And why do they want to see this happen?
They have this belief that pit bull dogs are responsible for all the killing that dogs do to humans.
It's like when you look at them - they look entirely normal - but when you talk to them - you suddenly realize - this person is really fucking crazy and has no idea what they're actually talking about.  That's the kind of person they are - how this person actually became President of the Board of Directors of the New Brunswick SPCA with ideas like this fuck wad has - I have no fucking idea.
So on to Mr. Hunt's actual belief's about pit bulls - on to the receipts - because I have them - he tried to delete all his comments - but no - in my world - you don't get to do that.  You don't get to do that in my world.  Sorry - I have been at this too long.
I'm just going to let you all read these screen grabs and let you judge for yourself - they were from a conversation that happened on June 9, 2020 on a facebook page called "Animal Crusaders of People for Stronger Animal Protection" - they are an animal advocacy group based out of New Brunswick - they were talking about the Megan Milner story.
Mr. Hunt chose to come and make these comments - he felt strongly enough about this comment and obviously did not feel that having these opinions would impact any of his life negatively.
There are a couple problems with his philosophy about "pit bulls" though - he seems to believe that pit bulls are somehow "mastiffs" - except that mastiffs are actually their own breed of dog - I own one - well I own half of one - Murphy is 1/2 mastiff and 1/2 poodle - and he throws the whole pit bulls have to look a certain way right out of window (I'll put a picture of Murphy at the end of this post so you can laugh your way all the way to wherever it is you are travelling to right now).
Another thing about pit bulls is - there are a TON of purebred dogs and their mixes that look like what people generally think pit bull type dogs are supposed to look like - between 40-60 pounds, short hair, skinny tail, wide smile, deep chest, wide forehead - so all kinds of dogs look like that - labrador retriever, beagles, weimeraners, chihuahuas, boston terriers, swiss mountain dogs - there are like 245 breeds and probably 150 of them look like pit bull type dogs - so how are people supposed to visually identify pit bull type dogs from other breeds of dogs when they all look exactly like?  You can't - and that's the point - "pit bull type dogs" isn't a breed - it's a catch all to give a visual identification
I also take issue with Mr Hunt's statistics - where did he get them from? Oh wait - I know - he got them from where all the pit bull haters get their statistics from - dogsbite.org - I wonder if Mr Hunt is in a long distance relationship with Ms Lynn herself he seems to be speaking the coded language of the haters speech so well - the problem is - the statistics he's stating are not Canadian statistics - and I have no interest in numbers if they aren't Canadian.
Until Ms Milner's death only 2 people have ever died because of a pit bull type dog - now 3 people have died.
Almost all people in Canada die from husky's or northern breeds - because most people die up north - where dogs run in packs and are territorial - which brings to mind - did you know that 2 days before Madame Vadnais died of the horrible and tragic pit bull mauling in Montreal - a 4 year old child died of a mauling in Nunavut.  Did you hear about that killing?  No?  Do you want to know why?  Because it wasn't a fucking pit bull numb nuts!  A four year old child died because of a northern breed of dog on June 6, 2016 and then a 58 year old woman died on June 8, 2016 because of a boxer pit bull mix and the whole world exploded and lost their fucking minds.  Can you understand if people who actually care about dogs and actually care about humans can get a bit angry.
So that's my spiel.  And this is why people like Robert Hunt are trash.  He should not be around any animals - he believes that some animals are worthy and some animals should be exterminated from the face of the earth.  And he is the President of the Board of Directors of the New Brunswick SPCA.  He is in charge of the life and death of animals.  That is actually quite despicable.  Has he killed any pitbulls?  Is there any way to find that out?  Sure he loves his dog named Rocky - because he is small and cute - but what about dogs over 30 pounds who's ears aren't cute and floppy - what does he think about dogs that look like that?
And now he's running for a seat in the provincial legislature with the Liberal Party.  What kind of power will that bring - he hates pit bulls and wants to see them extermated - how do all you New Brunswickers feel about breed specific legislation - if he wins - do you think he might table some legislation around bsl?  Are you willing to take that chance?  Fuck around and find out, why don't you?
Happy election this week, folks.
n

As promised - here is a picture of my Murphy - he's a 3 year old, 120 pound 1/2 poodle 1/2 mastiff - he is a very nice dog but he's very fearful - his first owner tried to train him to be a service dog and they used a shock and a prong collar on him which absolutely ruined him - he is much too timid for that - but it worked out for me because I got a fabulous huge mushy dog - he was trained too well though - I've only been able to get him up on the couch and the bed a couple times though - we've got his whole life to work things like that out so I'm not too worried :) 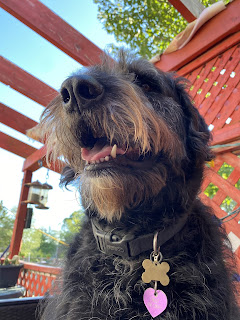