It is NEVER okay to steal someone's pets, okay? 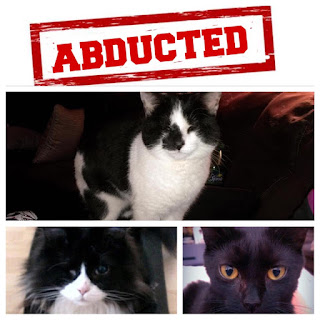 I have been ruminating about this post for a week, feeling very helpless - just like the owner of three missing cats does.

Denise Bull - the owner of cats Keely, Willow and Esther had moved to Toronto to start a new life and was forced to leave her cats behind temporarily because her housing in Toronto was fragile and the place she was staying at was incompatible with the needs of her elderly cats so her roommate here in Nova Scotia had agreed to look after them while she found permanent housing.

(This is a picture from HART of a mat on the back of one of Denise's cats)  Denise was taking care of them from afar - the cats are elderly and require special care - 2 of them are even blind - but still Denise takes care of them - one of them has a long coat and doesn't take very good care of it anymore as do a lot of elderly long coated cats and she develops mats frequently.  We have all been there - and Denise had scheduled her to go get it taken care of.

She had also scheduled someone - who she thought was a friend of hers - to come in and clip their nails - we all know that some indoor cats can have the daggers of death - and Denise was having that taken care of.

She had arranged to have a key to her apartment given to a friend of hers - and it's turned out that this was the worst decision she could have ever made.

Her cats have disappeared.  Stolen by a serial "disappearer" of cats - a person who has been reputed to have refused to return up to 16 owned cats from across the Annapolis Valley here in Nova Scotia.

The RCMP and NS SPCA have been contacted - all to no avail because a key was given to the people who stole the cats.

How has this happened?  None of what I've said above is being denied by the people who did it except they don't say they "stole" the cats - they say  they "rescued" the cats.

But it brings up the idea - aren't pets property? Didn't Denise own her cats?  Shouldn't she be able to get her "property" back from the people who took it from her?

Is it because they are cats and cats are the ultimate disposable item and even the RCMP and NS SPCA don't see any value in these cats?  Are they somehow afraid of this woman and her rescue?  I'm just putting these questions out there.

I know if a person in Nova Scotia had been reported to have screwed with or stolen 6 dogs - she'd have had her ass tied to a tree and been walked away from - and it would have been video taped and people would have  laughed.

But these are cats - is this why it's allowed to keep on happening?

If that's the case then I think that's wrong.

Is it because she's able to hide behind the fact that she runs an animal rescue? If so I think this is also wrong and maybe why we should have regulations for animal rescues here in Nova Scotia.

I have written a post here on this blog about what to do when you find a stray dog here in Nova Scotia - because after all, this is a dog politics blog - but when egregious things like this happen - I'm about all animals - but when you come upon any animal you think needs help - the answer is NEVER TO STEAL IT - because you know what you do when you steal an animal - YOU ARE BREAKING THE LAW.

Cat people are a rare breed - I have a lot of respect for cat people - I cannot believe that cat people are putting up with this - this 100% bullying behaviour from this person and the people behind her.  Cat people - dog people have your back on this one.

Here are some screen shots of the madness being put out by the cat stealers: 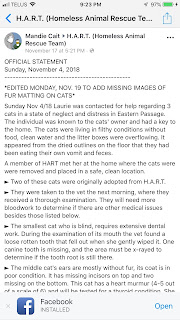 Hopefully these come out in the correct order - these are screenshots of the explanation of of the sordid story from one of Laurie Crow Wheeler's minions: 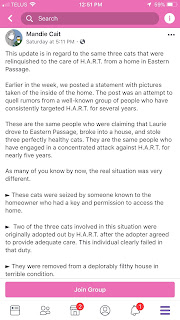 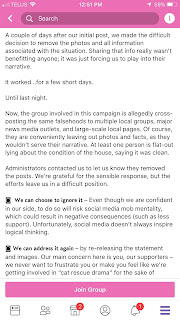 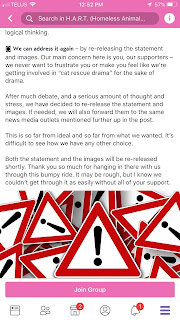