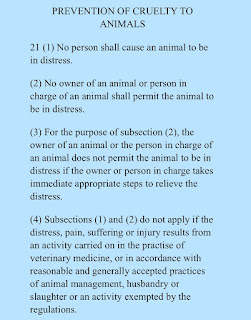 We found out through a court case in Nova Scotia this week that it's actually legal to cause distress to a domestic animal because of a couple lines currently in the Animal Protection Act under the "Prevention of Cruelty to Animals" Section.

In there under Section 21(1) it says "No person shall cause an animal to be in distress - which is fabulous, but if you go to Section 21(4) it says "Subsections (1) and (2) do NOT apply if the distress, pain, suffering or injury results from an activity carried on in the practice of veterinary medicine or in accordance with reasonable and generally accepted practices of animal management, husbandry or slaughter or an activity exempted by the regulations.

This came to light this week because the NS SPCA had charged a dog breeder - Debbie Baggs - with cruelty to animals for docking the tails of her puppies - boxer puppies when they were a few days old - she had done it herself because in 2010 the Nova Scotia Veterinary Medical Association had banned their members from performing the procedures of docking and cropping dogs for aesthetic purposes because it is an unnecessary medical procedure and  therefore against the oath of a medical professional.

For some reason though breeders who have these aesthetic's in their breed standards don't care - they think their dogs should look a certain way and they are willing to go to certain extents to have them look like their breed standards and they believe that they know what is best for the breed that they've chosen to nurture - and that includes veterinary professionals and the humane professionals tasked with determining what is distress and what isn't.

So Tuesday February 13th this court case was thrown out by the presiding judge because of Section 21(4) in the Animal Protection Act - the Judge believed this superseded the Federal Charge of "445 1(a) willfully causes or, being the owner, willfully permits to be caused unnecessary pain, suffering or injury to an animal or a bird"

Unfortunately the Judge didn't care whether or not the puppies were suffering or in distress - it says right in the Animal Protection Act under 21(4) that they ARE allowed to suffer and be in distress - just as long as they are suffering because of generally accepted practices of animal husbandry, animal management, or slaughter.

I think everyone who is not a breeder would understand that today this is not acceptable.  The Animal Protection Act is supposed to PROTECT domestic animals - not allow them to be in distress or pain.

And regarding the slaughter part - does that mean it's okay to shoot your dog - and if you don't kill him on the first shot - does this section now make it legal to keep shooting until he's dead - he's definitely suffering because he's not dead - but section 21(4) makes it okay for him to suffer because you are allowed to let your animal suffer in cases of slaughter.

So this one paragraph of the Animal Protection Act I'm hoping a lot of people will agree is not good - and now that we've seen it can get people off who are causing animals distress - needs to be removed as soon as possible.

What I'm hoping that people will agree to - is to start a petition.

What we need to do is find an MLA - and I propose we approach Minister Keith Colwell since he's the MLA in charge of the Animal Protection Act - and ask if he'll submit a petition in support of having this paragraph in the Animal Protection Act removed.  If veterinarians in Nova Scotia are not allowed to perform these procedures - nobody else should be allowed to do them either.

In Nova Scotia the only accepted petitions in the Legislature are paper petitions.

Once Minister Colwell agrees to submit the petition - I will make another post asking people to disburse them and pass them out.

I am hoping to have the petition submitted to the Legislature this Fall.

The best case scenario is that when I contact Minister's Colwell's office is that he says we don't need a petition - he sees how egregious this is and it is going to be removed without any problems whatsoever - but if he says we need a petition - let's get this thing done!

Animals in Nova Scotia should not be legally allowed to suffer and be in distress!  This is just wrong - simply because breeders say they know more than veterinarian's and the general public.

Let's get this done!

This is the letter I'm sending to Minister Colwell: 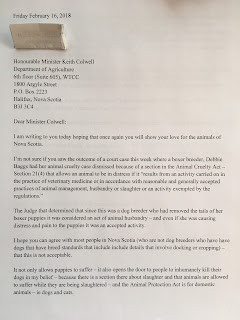 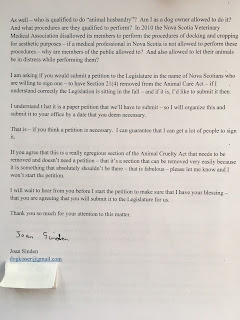