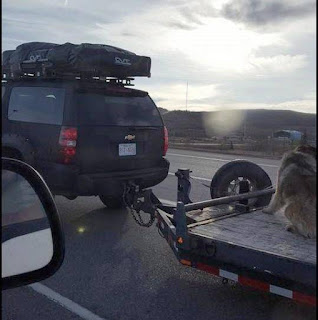 You may have noticed on your facebook timeline in the last day this picture of the 200 pound leonberger in Calgary who was being transported (illegally) on the flatbed of a trailer in Calgary.  His owner has been charged with causing an animal to be in distress, transporting an animal outside the cab of a vehicle, and other charges. 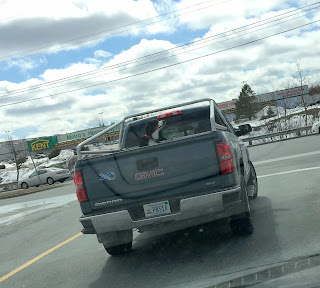 This is fabulous, and I'm very happy to see this.  In April of 2017 I observed a bernese mountain dog being transported in the back of a truck here in Halifax - in the Bayer's Lake park and then the truck went onto the 102 bicentennial highway and reached a speed of 100 kms of hour before exiting the highway and that's where I left them.  I took a short video to get evidence and took a couple pictures.

I then contacted the NS SPCA who said that they were going to charge the person because you could see the person's licence plate - so that was enough to identify the person and contact them - because it is illegal in Nova Scotia to transport a dog in the back of a truck unless it is in a secure enclosure like a crate.  It is written into the regulations - here - and it says:

Standards of care for transporting animals
9 (1) A person must not transport an animal in the trunk of a motor vehicle.
(2) Subsection (1) does not apply to a motor vehicle, such as a station wagon, passenger van, sport-utility vehicle or hatchback model, that does not have a closed area as its main storage compartment.
(3) A person must not transport an animal in a motor vehicle outside the passenger compartment unless the animal is confined or secured
(a) in a container that meets the requirements of subsection (4); and
(b) in a manner that prevents the animal from experiencing injury or distress, falling off the vehicle or otherwise injuring itself or causing a hazard to other vehicles.

In the Summary Offence Schedule that relates to Animal Offences - for causing an animal to be in distress for the first offence is $410.00 - and leaving an animal unattended or in conditions in a vehicle that could cause distress - is $697.50 - so there are definitely tickets that can be written for people who drive with their dogs loose in the back of trucks.

I gave a detailed statement to my contact at the NS SPCA and they thanked me very much - they had previously charged this same person a couple weeks previous with the same offence and were going to charge them a second time - he had a court date for the first offence of June 7th and for my offence it was going to be some time in August.

On July 21st I got an email from my contact at the NS SPCA with bad news.

The Crown Attorney's office had decided not to go ahead with the charges for three reasons:

1. Not in the publics interest.
2. Unable to establish conclusive suspect identification.
3. Dog does not appear to be in distress.

So even though something is against the law in Nova Scotia - if the Crown decides that it's not in the public's interest - ie it doesn't have to do with humans (I guess) - the Crown isn't interested in following up.

They weren't able to establish conclusive suspect identification - we had the licence plate - but we couldn't say who was driving the truck - it could have been anyone I guess.

The dog does not appear to be in distress - I guess the Crown Prosecutors - and not the NS SPCA knows what defines stress.

The owner of the dog DID completely claim his guiltiness because he agreed to donate $100 to the NS SPCA .

This to me is unacceptable - and when we see the same laws that are on the books across Canada being enforced it is just completely maddening.

I think it's times like this when stories show up in the media that it's a great time to contact our MLA's and point out that our Justice System should be enforcing the laws that we have here but aren't protecting our animals like they are across Canada.

Why - if it's illegal to have dogs in the back of trucks - aren't the laws being enforced?  And that is not a rhetorical question.

Here is the article from the Chronicle Herald about the dog in Calgary:

CALGARY — A Calgary-area man is facing charges after a photo of dog tethered to a flatbed trailer began circulating on social media.

Calgary police, the Calgary Humane Society and Rocky View County began an investigation shortly after the photo surfaced on Oct. 28.

Brad Nichols of the humane society says transporting dogs in the bed of trucks is extremely dangerous for dogs.

He says they risk falling off and are exposed to extreme weather.

Nichols says it was even more dangerous for the dog in this case because the flatbed truck had no side rails to keep him on the trailer.

Volodymyr Irodenko of Rocky View County was charged Saturday with causing an animal to be in distress, transporting an animal outside the cab of a vehicle and other charges.

Here is an article from Metro back in April about the man who was charged with having his dog in the back of a truck:

A Halifax man who let his dog roam free in the back of his moving pick-up truck and a Queens County woman who docked puppy tails are facing charges under Nova Scotia’s Animal Protection Act.

In a media release, the Nova Scotia SPCA said Halifax resident Murray Newton is charged with “causing distress to an animal by transporting a dog in the back of a pick-up truck without being secured in a carrier.”

Newton is also charged with failing to provide reasonable protection from injurious cold.

He is scheduled to appear in Halifax court on June 7.

“The regulations are very clear in the Act that states that a person must not transport an animal in a motor vehicle outside the passenger compartment unless the animal is in a secured container or in a manner that prevents distress to the animal,” Jo-Anne Landsburg, chief provincial inspector of the Nova Scotia SPCA said in the release.

Debbie Baggs, 44, of Hunts Point has been charged for docking puppies’ tails “causing distress to the animals.” She faces two counts of animal cruelty and is scheduled to appear in Dartmouth court on June 7.

The Nova Scotia SPCA said the practice of docking dog tails was provincially banned in 2010 by the Nova Scotia Veterinary Association.

Veterinarians are not permitted to perform the procedure for cosmetic reasons.

“Docking is a medical procedure to remove part of the dog’s tail. It is often done by snipping the tail off with scissors or by placing a special band on the tail to cut off blood supply causing the tail to fall off,” Landsburg said in a media release.