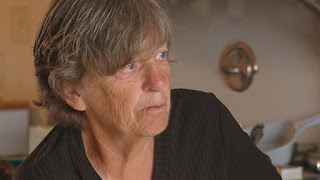 I wanted to write a post about Sandra Tomalin - who has been convicted of animal abuse in New Brunswick and Ontario and has just finished up a court case in PEI for animal cruelty - she may move to Nova Scotia next - and without a national registry for animal abusers - if she moves to Nova Scotia next I want her name out there so no one gives her any animals - in Ontario she was given a lifetime prohibition for abusing 100 dogs - in New Brunswick she was given a 10 year prohibition for abusing 38 horses and in PEI she was on trial for abusing a cat so she has abused just about every type of animal - as well - in 2005 they had 16 dogs removed from their property because of neglect, but no charges were ever filed.  I'm including an article below that details conditions found when they removed the 100 dogs because it really shows the level that these ladies will allow animals to suffer.

In 2010 Ms Tomalin was handed a lifetime ban on the owning or caring for dogs after 100 dogs were seized from her property in 2009.

In 2011 she was handed a 10 year prohibition with her sister Beverley after moving to New Brunswick after abusing 38 horses - according to the judgment rendered by the judge the Tomalin's failed the horses in every way imaginable - the horses were full of parasites, they were starved, they didn't have proper shelter - the horses were absolutely dying.  I can only imagine in what shape those poor 100 dogs were going through in Ontario in order to get a lifetime prohibition. 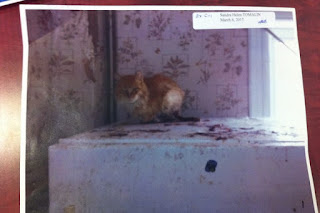 Currently in PEI the cat that they are currently in court for had to be euthanized he was suffering so much - so for these ladies to get their hands on any more animals will be a huge crime if they just up and move to another province.

If they do come to Nova Scotia it behooves us to not let them to have any more cats dogs horses or even mice or rats or fish. 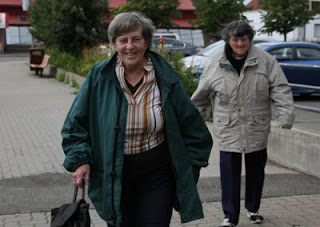 Two elderly sisters who had 100 dogs removed from their rural Meaford home in late 2008 have been banned from owning dogs for the rest of their lives.

Beverley Tomalin, 71, and Sandra Tomalin, 68, pleaded guilty Monday morning to one count each of failing to provide care for their dogs, under the Society for the Prevention of Cruelty to Animals Act. The Crown and defence agreed to the resolution and all criminal charges against the sisters were dropped. The Tomalins had both been charged with one count of wilful neglect of dogs and 11 counts of causing unnecessary suffering by failing to provide adequate medical attention for the animals in their care. They were scheduled to go to trial on the charges later this month.

The sisters have both been banned for life from owning, having custody or care of, or living with any dog. Both women agreed to allow OSPCA inspectors to enter buildings on the property to ensure compliance with the order.

"They have accepted the fact that the order is a reasonable one," said Conlan, adding that the Tomalins are looking at the resolution as a chance to get on with their lives.

Conlan said a trial would have been difficult for the defence, particularly given the health of Beverley Tomalin, who suffered a stroke in 2008. She suffers from vascular dementia, hypertension and other symptoms from a left cerebral stroke that has significantly affected her mobility on her right side. Dr. Cam Tweedie of the Owen Sound Family Health Team provided an opinion last month that Beverley Tomalin would have been medically unable to take part in a trial.

Both sisters have limited education, leaving high school before completing Grade 10. They are both retired farmers and live on the farm. Neither is married or have children.

Conlan said the resolution will hopefully put the Tomalins in a position on their farm where they will have far fewer animals to care for, enabling them to focus their attention on the animals they still have.

"Any time there is a resolution it is a bit of a compromise on both sides," said Conlan. "This is not ideally what the Tomalins wanted, but they accept that it is a reasonable resolution.

"In the end this is a good result for Beverley and Sandra, given that all of the criminal charges against each have been withdrawn."

"It should hopefully ensure we are not back dealing with a similar issue on the same property," said Bluhm. "I am quite happy a resolution was able to be reached."

Bluhm said there will be unannounced visits to ensure compliance with the orders.

The investigation at the Tomalin farm began on Nov. 20, 2008 after the Ontario Society for the Prevention of Cruelty to Animals Bruce-Grey branch received a complaint, according to the agreed facts read by assistant Crown attorney Andrew Shatto.

On Nov. 30, 2008 a warrant was obtained and on the morning of Dec. 1 OSPCA investigators, along with a veterinarian and OPP officers, attended the Tomalin property on Irish Block Rd. in Meaford.

In 2005, animal cruelty charges against the sisters were withdrawn in exchange for a peace bond and promises of future veterinary inspections at their farm. Those charges stemmed from a separate OSPCA raid on Jan. 16, 2004, when 16 dogs were seized.

On Dec. 1,2008, according to Shatto, the smell of ammonia in the house was overwhelming and the barking dogs were very loud making it difficult to communicate.

About 100 small breed dogs, including llasa apso, papillons and pekingese were found in every room in the house, including the upstairs bedroom and the basement.

"The dogs were living in very unsanitary and overcrowded conditions with most of the dogs extremely matted and many appeared to be urine-soaked and had feces matted into their fur," said Shatto.

Shatto described a home that was cluttered and in disrepair with holes in the floor, non-functioning plumbing and buckets of waste in the bedrooms, bathroom and on the front porch.

"The smell of ammonia was overwhelming and the investigators had to leave, despite wearing masks, to get their breath," Shatto said.

Little or no bedding was available to the dogs, most did not have water and many were found to be dehydrated and thin. Puppies were found in makeshift boxes with a buildup of feces and soiled paper. There was a dead puppy in a box in the dining room. Some of the dogs in the home had untreated medical conditions including ulcers of the eyes, dental disease, ear infections and tumours, Shatto said.

The veterinarian concluded the dogs were in distress in intolerable conditions and were not receiving adequate care and were removed from the property, Shatto said.

The dogs and one cat were taken to the provincial animal shelter in Newmarket where they were cleaned up and treated for their medical conditions. It took 20 staff and volunteers three days to bathe and groom the animals. The Animal Care Review Board found that the OSPCA was justified in removing the animals from the Tomalins and the animals were ultimately forfeited to the OSPCA in February 2009 as the costs for caring for the animals of $158,454 had not been paid.

Conlan said in court that while the Tomalins disputed some of the allegations, they admit the circumstances inside the house were crowded and that some of the dogs had untreated medical conditions.

"The Tomalins admit that some of the dogs had grooming deficiencies and in all of the circumstances, Beverley and Sandra Tomalin admit unequivocally that they failed to provide generally the standards of care generally for the dogs," Conlan said.

Shatto said in court that the Crown thinks the penalty agreed to under the resolution is a significant one.

Justice Julia Morneau said there seems to be overwhelming evidence care for the dogs was not being provided and found the sisters guilty of the charge.