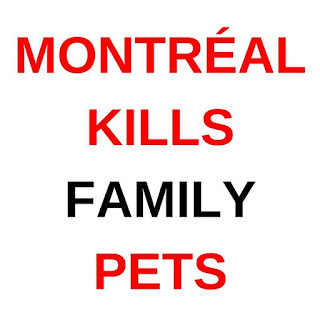 On September 27, 2016 Montreal Quebec passed one of the most draconian dog bylaws that Canada has ever seen - or hopefully will ever see.

It was precipitated by a really tragic death this summer of a woman in Montreal by a dog - who's breed is still unknown and we may never know the breed of the dog but it was initially said to be a pit bull type dog - it was licenced with the city as a boxer.

If Animal Control were doing their job however the tragedy never would have occurred - the dog had 2 prior bite incidents - so it was a dangerous dogs - if that dog were living in a city such as Calgary - or Halifax - it probably would have been seized - and this 3rd and final incident would never had happened.  But unfortunately it did - and now every dog and dog owner in Montreal - and probably ultimately Quebec now has to deal with the fallout.

The new bylaw comes into effect on October 3rd, 2016 and the most publicized part of it is the breed specific ban that has pit bulls becoming outlawed in the city - no new pit bulls can be owned in the city after that date and owning that breed is going to become very difficult for those dogs and their owners. They have to:
- pay a $150 registration fee
- this special permit must be done by December 31, 2016
- submit to a criminal background check
- muzzle their dogs at all times - even in their own backyards - the muzzles have to be worn effective October 3, 2016
- not allow anyone under 18 to walk their dogs - even members of their own family
- must be kept on a 1.25 metre leash
- owners can only have one pit bull type dog

And a "potentially dangerous dog" doesn't have to be a pit bull type dog - it can be any dog that - tries to bite or attack, that bites or attacks, that commits an act likely to prejudice the safety of a person or an animal of a species permitted in accordance with Section 3; (ie dog, cat, rabbit, toad, frog, fish etc.,)

And for the record - what is "likely to prejudice the safety of a person or animal"? That isn't even attack or bite - that is something completely other and different - and is something that is I've talked about previously when talking about ridiculous dog bylaws.

So that's what is specific to pit bull type dogs - but there are a lot of things that all dogs - including pit bull type dogs and their owners also have to contend with under this newly revised dog bylaw in Montreal that are quite scary for people who are worried about intrusive laws.

ALL dogs and cats in the city of Montreal MUST be sterilized - unless they can prove that it is a purebreed dog from a recognized purebred registry ie a CKC registered dog. So they now have mandatory sterilization for every pet dog and cat in Montreal - which has to be done by December 31, 2019 - they also must be microchipped and show proof of proper vaccination.

If your dog is more than 20 kg you have to walk your dog with a harness.

There is also a strict limit on the amount of pets you can have in your home of 4 pets - 2 dogs - and a mix of any other pets - cats, rabbits, toads, fish or whatever else - and only one of those dogs can be a pit bull type dog. You can apply for a special permit to allow for a 3rd dog if you have more than 2 dogs. So like with Sophie's Choice if you currently have more than 3 dogs - you are going to have to decide which dogs you are going to give up.

And don't let your cat outside - any cats that are found will be euthanized - so if your cat escapes - by the sound of the bylaw - unless it's licenced (and hopefully because of that it will get a free ride home) - it will be euthanized.

As well - they have it written into their bylaw that if they believe you are harbouring a prohibited pit bull in your home - they can - without a search warrant - enter your home and search it from top to bottom - in order to seize that dog and euthanize it.

So what exactly does the city of Montreal consider a "pit bull type dog?" 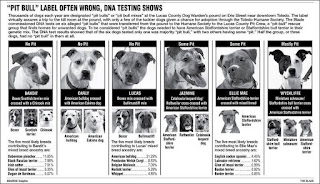 So basically it's anything that has short hair and a wide forehead. People have been trying to figure out who is going to decide what the city considers to be a pit bull and nobody has figured that out yet. All anyone can figure out so far is that there is no appeal process with the new bylaw - so that if your dog is seized - it is going to be euthanized and there is nothing you can do about it.

So what does all of this mean? To me it means that basically there's a war on dogs in the city of Montreal - a city where it's tough to be a dog anyway - every year 100's if not 1000's of dogs are dumped every July when people move - dog ownership in Quebec seems to be different than it is in other places in the country it seems - so making dog ownership even more difficult in Quebec seems quite ridiculous.

And making dog ownership so expensive by having to have all these special permits and a background checks for pit bull type dogs is going to make it almost impossible for people who are struggling to put food on the table for the humans in the family - it just won't be viable for the dogs in the family.

Maybe that's the mayor of Montreal wants - he wants everyone to have to surrender their dogs or dump their dogs at the shelters, it's really quite awful.

And it's all for nothing - the overwhelming science says that pit bull type dogs are no different than any other type of dogs - dogs are invdividuals - just like humans are.

But the councillors and mayor of Montreal said they decided to go with "common sense" and not "science" - that's what they actually said. Unbelievable.

Right now there are rescues everywhere saying they are wanting to get pit bulls out of Montreal - but I don't think that's the answer - I always think that the better answer is to keep dogs with their original owners if that's at all possible.

There is a rescue - "Prairie Pit Bull Rescue" who have pledged $20,000 of their own money to help pay current pit bull owners who can't afford the $150 to pay for special permit to help them pay for the onerous fees - you can read about in a fabulous post that they wrote - here  - I think that this is the best idea that I've come across - rather than trying to move mythical pit bulls that might or might not exist and giving to gofundme campaigns for non-existent dogs. 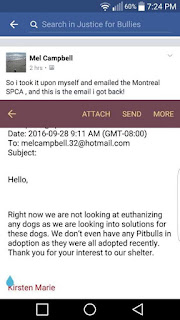 The Montreal SPCA has said they don't even have any pit bulls in their shelters because they placed all the dogs they had prior to the bylaw being passed - so if you see any gofundme campaigns asking for money to bring pit bulls to your area - please hold off giving any of your hard earned money.

The Montreal SPCA has also launched a lawsuit in response to new bylaw asking for a judicial review and to suspend the application of the sections of the by-law targeting “Pit bull type dogs” in order to then have these sections declared illegal, null, and without effect by Quebec’s Superior Court. So the fight for this horrible bylaw isn't over yet. You can read more about this at http://www.spca.com/?p=13494&lang=en

If you want to help with the SPCA's legal challenge - you can donate to the cause at https://secure.e2rm.com/registrant/donate.aspx?eventid=201163&langpref=en-CA

If you want to read the bylaw - you can go to http://www.chicobandido.com/public/montreal_animal_bylaw_en.pdf

Perhaps the worst part of this is that in the near future the whole province of Quebec is going to enact breed specific legislation - if that happens they will follow the province of Ontario and with  this very horrible misguided law - and because they are 2 most heavily populated provinces in Canada - 60% of the population of Canada will be under breed specific legislation.  That is a very sad number.

We are all outraged out Montreal - but there are areas in Nova Scotia that also have BSL - so dogs are in danger here as well - if you want to read about that - click here - http://dogkisser.blogspot.ca/2016/10/breed-specific-legislation-passed-in.html
Posted by Joan Sinden at Thursday, September 29, 2016