New Brunswick and Quebec have been historically the puppy mill capitals of Canada because of their lax animal cruelty laws and New Brunswick continues to prove it with the recent news of the rescue of 26 small breed dogs at the beginning of September.

They were between the ages of 2 and 13 years old and were given up because of health issues with their owner - most of them were immediately put into new homes - but 7 of them have come to Nova Scotia and require extensive vetereinary care and are needing to fundraise about $10,000 because all the dogs have major dental issues - some have decay up into their nasal passages it's so bad.

This is nothing new for puppy mills in New Brunswick though - a few years ago a veterinarian in New Brunswick - a Dr. Ted Morris - said about a dog that after his seizure from Chapman Kennels and had to have all but 3 of his pulled "the Maltese was a working dog and would survive well with his K-9 teeth" - he said that because he didn't feel that breeding dogs in a kennel needed teeth in order to do their job - produce puppies for the owners of the puppy mill.

That was in relation to Chapman Kennels - a kennel in New Brunswick that in one day - KILLED - 175 of their dogs because they were shutting down their operation and didn't feel like they could sell breeding their dogs anywhere.

You could ask yourself - how could this happen? Well New Brunswick is different from other provinces in that the New Brunswick SPCA actually licences breeders. They give them a seal of approval. Which to some seems it can be a bit dangerous. It could seem to be giving people looking for a healthy puppy a false sense of security.  Chapman Kennels was a licenced breeder.

We don't know if the kennel that these 26 dogs came from at the beginning of September was licenced or not - or whether or not this case was even just a hoarder who let things get out of control, but we one thing we do know is that this person was a CKC registered breeder, and we do know that there has been no complaint lodged against this person before the dogs were dispersed - so probably this person is not going to face any charges from the New Brunswick SPCA. So all the suffering done by those 26 dogs is going to done in vain. Which is a shame.

Here is a CBC News Article about the story 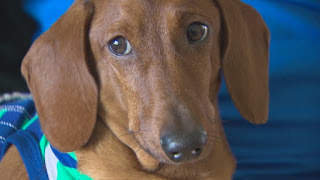 The Atlantic Canadian Dachshund Rescue, a group that connects unwanted or seized wiener dogs with homes and medical treatment, is appealing for $10,000 in support after seven dogs it recently saved in New Brunswick were found to have severe health problems.

Heather Curran, a volunteer with the not-for-profit group, began fostering one of the dogs a week ago. She said the eight-year-old male dog, named Madison, needed to have all his teeth removed.

Madison is on a diet of mashed dog food. When he came to Curran last Sunday, he stayed in his crate with his tail between his legs. After a few days, Madison is constantly by Curran's side. The dog doesn't bark or lick and he doesn't know how to do any tricks.

Madison was one of 26 dogs — 19 of which were dachshunds — recently seized from one New Brunswick home. The owner injured herself and was hospitalized, and a local kennel club stepped in to help the dogs. Seven dachshunds came to Nova Scotia while 12 went to foster homes in New Brunswick.

The Atlantic Canadian Dachshund Rescue usually treats an average of seven dogs a year that come into their care with minor health issues. This year, it's going to be more costly. The group spent $1,500 to pay for Madison's dental work and it still has six more dogs in need of treatment.

"To help these other dogs, it basically means an extreme amount of money coming to us from kind people or organizations so we can get them in surgery ... It is that bad," said rescue president, Diane Redden.

Redden said the group's yearly fundraisers like Weinerpalooza at Shubie Park in Dartmouth, provide the funds they need for basic care. She estimates it will take more than $10,000 to finance the surgeries needed for the other six dogs.

Redden said all of the dogs have dental issues, with several needing complete tooth extractions.

"The important thing is that they get the care they need, making sure their futures are better than what they came from," said Redden.

Redden said the group doesn't blame the previous owner for the conditions the dogs were living in, but is grateful the owner came forward when the dogs' care became too much.