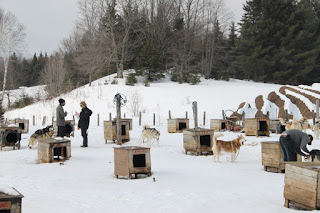 A sled dog yard in Quebec

The Montreal SPCA is asking the Quebec government to ban keeping dogs chained around the clock as part of an upcoming overhaul of the province's animal-rights legislation.

There is an article on the CTV News website that interviews both the Montreal SPCA and Bernard Saucier, president of Quebec's Sled Dog Club - who gives us some very choice quotes on what he thinks about chaining dogs out. It's quite unbelievable really, what he says.

He "says anti-tethering campaigns are based on a lack of understanding, and maintains that his dogs are happier and healthier tied outside near their friends than stuck in a house all day."

"My dogs are in a park, they each have their territory, they socialize with their friends, run around their houses, go take a nap, they can urinate when they need," he said. "They get more exercise outside than lying around a house all day." 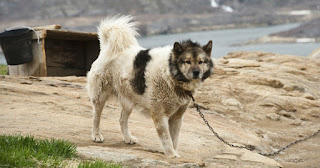 If that isn't the biggest load of hooey you've ever heard in your life - I don't know what rock you're living under.

What are the reasons that companion dogs exist in today's world?  Is it soo that they can run around a dog house continually, bark at the air and lay down next to their own feces and urine and live in a 6 foot perimeter with a chain hanging off of them their whole life - "near" their "friends" - but never able to actually touch them, interact with them or play with them?

My dogs, and all companion dogs, live inside a house - have access to water that's not been tipped over because the chain has knocked it over, usually have a plethora of toys to choose from to play with - have a soft bed - or a couch, or a soft chair to sleep on - have soft music or the tv in the background - a lot of times have a dog brother or sister that they can cuddle with and actually interact with through the day while their owner is at work - they also have the freedom to bark at any time they want to - they have access to water any time they want, and because they are trained and socialized - they hold their pee and poop inside until their owners get home.

They just hang out and relax all day and then when their owners get home they have alot of fun for a few hours, and then they have the best time of all - they get to sleep with their owners all night long - the piece de la resistance.  The best part of their day as far as the dog is concerned.

What part of this does a sled dog get?

What part of a sled dog's life could possibly make them happy?  The 30 seconds that the human is in the yard feeding them once a day?  Give me a break.

And they call that "responsible tethering".

They are prey to passing transiant dogs - none of them are ever spayed or neutered, so any dog that passes by can have their way with them - they are trapped.  Any human that wants to come by can abuse and tease them.  They are marked targets.

So all of this added up makes permanently chained dogs - sled dogs, not "happier and healthier" - but in fact sad and marked targets that you can do nothing but feel sorry for - and hopefully the Quebec government will enact legislation that will do a better job of protecting them in the future.

Here is the CTV News article -

MONTREAL - The Montreal SPCA is asking the Quebec government to ban keeping dogs chained around the clock as part of an upcoming overhaul of the province's animal-rights legislation.
The animal welfare organization is launching a campaign Tuesday to raise awareness about tethered dogs, which they say are more likely to be injured or neglected, are exposed to the elements, and suffer psychological damage as a result of being constantly tied.

"Dogs are social animals. They need to be in contact with other dogs, with other animals, with people," said Sophie Gaillard, the SPCA's lawyer and animal advocacy campaigns manager.

"When they're kept isolated and deprived of the ability to play or exercise they develop very severe behavioural frustration, boredom and psychological distress," she continued.

Quebec introduced a bill earlier this year that, if passed, would see the status of animals upgraded from "movable property" to "sentient beings."

The SPCA is hoping to get a ban on round-the-clock dog tethering included in the bill or accompanying regulations, which will be debated this fall.

Gaillard said the bill would not focus on people who walk their dogs on leashes or tie them up for a short time, but rather on dogs who spend every day on a chain.

Both New Brunswick and Nova Scotia have recently passed legislation banning 24/7 tethering, as have some municipalities across Canada.

Gaillard says that in addition to welfare concerns, tethering of dogs is a "public safety issue" since dogs who are tied are more likely to attack humans or be involved in dogfights since they are less well socialized and cannot flee from perceived threats.

The SPCA's proposal may face opposition from some groups including the province's sled dog community, who commonly keep dogs outside on tethers.

Bernard Saucier, president of Quebec's Sled Dog Club, says anti-tethering campaigns are based on a lack of understanding, and maintains that his dogs are happier and healthier tied outside near their friends than stuck in a house all day.

"My dogs are in a park, they each have their territory, they socialize with their friends, run around their houses, go take a nap, they can urinate when they need," he said. "They get more exercise outside than lying around a house all day."

Gaillard maintains that sled dogs are still deprived of social interaction because they cannot touch each other and are rarely let free.

Saucier said his dogs cannot touch but are let off their tethers to play in small groups at times.

He said anti-tethering campaigns are the result of well-meaning people who want to ascribe human characteristics to their pets.

"There's not a dog kept in a house that's as healthy as ours," he said.

The SPCA is launching a website, cutthechain.ca, to raise awareness about the campaign.
Posted by Joan Sinden at Friday, September 11, 2015