Here is some of what Tristan said in his podcast - you can listen to it in it's entirety here:

Tristan said his opinion on shock collars is that he's never met a dog in the 8 or so years he's been training dogs he's never met an animal that he thought that putting a shock collar on them would improve his relationship with that animal - it comes down to your ethics - if you think it's okay to smack your child, then it's the same thing with shock collars - it can come down to the ethics of the country and what's legal in that country - shock collars are illegal in many countries - and is also illegal in Quebec - it's legal to sell shock collars, but illegal to use them in Quebec.

There's no doubt that shock collars work to change behaviour - but do we think that it's ethically okay to do that - if you put a shock collar on your 2 year old child, you'd be thrown in jail because ethically that's unacceptable but we're still at a point where it's ethically acceptable for dogs and one of the reasons is we're not legislated to do good proper training so when people run into problems, they don't know how to fix it so they look for an immediate fix, because that's what you want... and using that tool can get you the immediate results that some people are looking for because proper training, and really listening to the animal and building a relationship takes time and it takes a lot of expertise - so if you can't find a good trainer, a lot of people are turning to these tools because they want the quick fix.

So many organizations are against these that he doesn't know how an average person could not agree with the overwhelming amount of professionals who are against these devices -
- Canadian Veterinary Medical Society says the use of shock collars is associated with short term, long term negative consequences including fear and anxiety. Training methods including pain, fear, distress or anxiety including the violent use of shock collars are to be condemned
- American Humane Society
- American Society of Veterinary Behaviourists
- UK Kennel Club

As well, in Monday's Chronicle Herald - Pat Lee covered the topic in her weekly "Pat Lee Pet Corner" column - "E-collars put to the Test" - you can read her column below - she took me up on my challenge and got herself shocked, and didn't like the feeling very much. 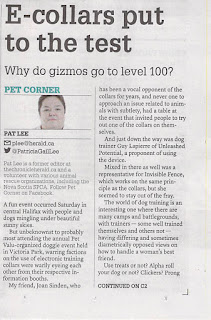 But unbeknownst to probably most attending the annual Pet Valu-organized doggie event held in Victoria Park, warring factions on the use of electronic training collars were warily eying each other from their respective information booths.

My friend Joan Sinden, who has been a vocal opponent of the collars for years, and never one to approach an issue related to animals with subtlety, had a table at the event that invited people to try out one of the collars on themselves.

And just down the way was dog trainer Guy Lapierre of Unleashed Potential, a proponent of using the device.

Mixed in there as well was a rep for Invisible Fence, which works on the same principle as the collars, but she seemed to stay out of the fray. 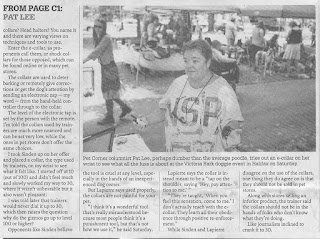 The world of dog training is an interesting one where there are many camps and battlegrounds, with trainers — some well trained themselves and others not — having differing and sometimes diametrically opposed views on how to handle woman’s best friend.

Use treats or not? Alpha roll your dog or not? Clickers? Prong collars? Head halters? You name it and there are varying views on techniques and tools to use.

Enter the e-collar, as proponents call them, or shock collars for those opposed, which can be found online or in many pet stores.

The collars are used to deter barking or remotely give corrections or get the dog’s attention by sending an electronic zap — my word — from the handheld controller through to the collar.

The level of the electronic tap is set by the person with the remote. I’m told the collars used by trainers are much more nuanced and can be set very low while the ones in pet stores don’t offer the same choices.

I took Sinden up on her offer and placed a collar, the type used by trainers, on my wrist to see what it felt like. I started off at 10 (out of 100) and didn’t feel much and slowly worked my way to 30 where it wasn’t unbearable but it also wasn’t pleasant.

I was told later that trainers would never dial it up to 30, which then begs the question why do the gizmos go up to level 100 or higher?

Opponents like Sinden believe the tool is cruel at any level, especially in the hands of an inexperienced dog owner.

Lapierre, on the other hand, says used properly the collars are not painful for your pet.

“I think it’s a wonderful tool that’s really misunderstood because most people think it’s a punishment tool, but that’s not how we use it,” he said Saturday.

Lapierre says the collar is instead meant to be a “tap on the shoulder, saying ‘hey, pay attention to me.’

“They’re taught, ’when you feel this sensation, come to me.’ I don’t actually teach with the e-collar. They learn all their obedience through positive re-enforcement.”

While Sinden and Lapierre disagree on the use of the collars, one thing they do agree on is that they should not be sold in pet stores.

Along with stores selling an inferior product, the trainer said the collars should not be in the hands of folks who don’t know what they’re doing.

Like journalists inclined to crank it to 30.
Posted by Joan Sinden at Thursday, July 09, 2015