I went there specifically because something amazing has happened - mixed breed dogs can now compete in rally-o and obedience - so mixed breed dogs can now enter the building - the Halifax Kennel Club has been in existence for 70 years and has never allowed a mixed breed dog through it's doors - but this September for the first time, if you meet the qualifications - your mixed breed, neutered dog could come into the room to compete for obedience and walk amongst the hallowed halls of the Halifax Kennel Club - and that to me is a pardigm shift and really shows something is shifting in the purebred world. 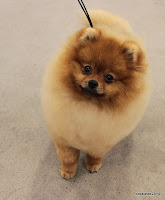 Today when I was there watching the obedience trials - there were no mixed breed dogs competing - but it's only a matter of time before a dog applies and gets in through the doors - the time is coming when a neutered, mixed breed dog is in the room, and heads will turn when that day happens.

There were a lot of very cute purebred dogs there today, that's for sure - but those are not the only types of dogs in this world - I have a 20 year old dog that is still very healthy and she is a mixed breed dog, and I have 2 purebreed dogs that are both CKC registered and they both have a lot of problems

Every part of the dog world has its place in getting a dog - and the pure bred dog world has its place too - responsible dog breeding certainly has a place in the world in dog acquisition - you just have to be really careful when choosing a breeder - it's not like with rescue where you fall in love with a dog - getting a puppy is much less tangible.

In reality it's all a crap shoot either way - you are taking on an individual who is going to grow and change from day to day whether it's a puppy or adult so it's a lifetime committment whether you get a purebred or puppy - and I think it's fabulous that the CKC has recognized that mixed breed dogs do exist and are part of the fabric of Canadian life.