People for Stronger Animal Protection put on a rally in New Brunswick and tons of people come out to support them! 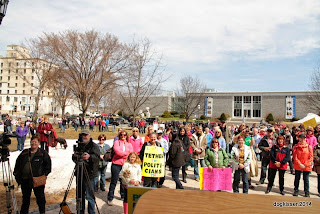 I was so lucky that I was invited this past Saturday to a rally in Fredericton for the group "People for Stronger Animal Protection"'s rally that they organized in front of the legislature in Fredericton - they had a lot of great speakers - the mayor of Moncton, MLA Pam Lynch, dog trainer Bill Grimmer - People for Dogs Scott Saunders, myself - and PFSAP's Rita Bier and Susan Henley also gave super speeches - they had tons of media there which was great to see and they really got their message across that animal abuse in New Brunswick isn't going to be tolerated anymore and legislation in the province has got to be changed so that animals won't have to suffer.

I'd like to thank the organizers for inviting me up - I had such a good time - it was an honour to be involved in the day! 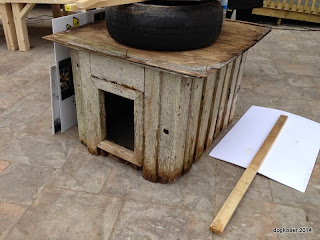 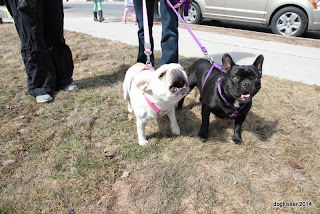 A couple of very cute frenchies telling us what they think of animal abuse! 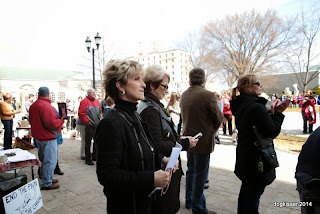 A couple of the organizers Wendy and Susan

"When I was thinking about what I could talk about today I looked back at old blog posts that I’ve written on a blog that I have going back to 2003 - and it occurred to me that you guys here in New Brunswick should be proud of yourselves – when push comes to shove – you step up – back in 2004 your province was faced with the prospect of province wide breed specific legislation – maybe a lot of you remember that time – there were hearings held around the province – and guess what – you all won – you don’t have bsl in your province today.

In 2009 a kennel by the name of Chapman killed 175 dogs and no one noticed. Also in - In 2009 a man by the name of Keith Barton bludgeoned his Pomeranians to death – he killed all but one - a beautiful little creature named Sugar Bear – Mr Barton was found guilty of only count of cruelty to animals – but the animal lovers of New Brunswick came together to form something called “The Bark Campaign” – which I can’t help but think has led us to this rally today - to this huge group of animal loving New Brunswickers who are committed to making the world better for animals who can’t help themselves.

In Nova Scotia we are very close to having it in our laws that abandoning a pet will be illegal when our new regulations come into effect – hopefully in the fall – it will be illegal to abandon an animal in Nova Scotia. Here in New Brunswick your animal advocates don’t walk away from animals in distress – and that is something to be very proud of – you have many people here who are stepping up today, and have been for a long time – for all animals – and it has gotten us to this rally today - so that today – lots of people are listening and caring and wanting to make changes to the laws you’re currently living with so that the people who have the real power won’t be allowed to walk away from animals in distress, and basically abandoning that animal wherever it is.

The reason I’m here today is because of the anti-tethering movement – how it’s been brought to the forefront in the last year and the great strides we’ve made bringing it to people’s attention – and to the legislators attention too!

I run a rescue called No Chains all Love that since last July has taken in 35 dogs – 32 of which were permanently chained – some to dog houses, some to just trees with no shelter at all – but when all of them were unchained something magically happened – they became normal dogs. They didn’t become perfect dogs – you only have to look to your own dogs to know that a perfect dog does not exist – but these chained dogs – who statistics say are 2.8 times more likely to bite and are in the news for mauling children – have all just become normal pets when the chain is taken away. It’s a fact. We are proving that one dog at a time in Nova Scotia with no chains all love.

Tethered dogs deserve the same love and attention as any other dogs and it’s time that they get the same attention under the law as well.

Tethering gets to the core of cruelty to animals – dogs cannot escape from where they are at and they are at the mercy of everything – their owners, their environment, the weather, other passing loose dogs, wildlife – everything – that’s why it’s so heinous – and why it needs to be stopped – and it’s so simple to do – just bring the dog inside – and if you as the dog owner can’t do it – let the dog go.

What most moved the anti-tethering movement along in Nova Scotia was the people of Nova Scotia – the time had come and people were sick and tired of seeing the same dogs in their neighbourhood being neglected day after day after year after year – and started calling the SPCA over and over and over and over – and it has produced results - those dogs are now gone – the SPCA has in fact seized 100’s and 100’s of dogs in the last 9 months because people have started to believe in their own power – when they see nothing happen – they call again – and again – until something is done. And it’s working.

The agenda at the NS SPCA HAS changed – they DO seize chained dogs now who live in poor conditions even if they have food water and shelter – they will seize a dying dog even if he has water food and shelter – and that’s a paradigm shift – and it only happened because the people of Nova Scotia demanded it. And that’s a fabulous thing – People do have power.

It wouldn’t have happened though if we would have continued to allow the status quo – if we would have allowed to have dogs continue dying on their end of their chains – hopefully no more will, but I’d imagine we haven’t seen the last of it unfortunately – I hope not too many more have to die before we get our laws, and the enforcers of our laws doing things the right ways.

Here in New Brunswick you too have had enough of pet owners who are not willing to give their animals basic care – and that makes sense to me – because for as long as I’ve been watching the animal advocate community – this last 10 years – your province has been stepping up when you’ve needed to – and I know you will continue to do it until the job is done – the rest of Canada can only step back and watch.

Your time has come – and the government of New Brunswick should get it’s legislation in line with what it’s constituents beliefs are – let them hear what your voices are, and make them listen!"
Posted by Joan Sinden at Monday, April 28, 2014