no chains All Love Dog Rescue is still chugging on

I thought I would do an update on the little dog rescue that I started in July in response to the need that People for Dogs expressed - that they were worried that people would want to surrender chained dogs to them and they wouldn't have anywhere to place them to - so I said I'd start a rescue so that the dogs would have somewhere to go.

To date we've rescued around 10 dogs and they've all been fabulous dogs - which is something that I want to show with this rescue - that once dogs become unattached to a dog house that they are just normal dogs.

We always hear that horrible statistic - that chained dogs are 2.8 times more likely to bite than dogs that aren't chained - but it's my belief that once they become unchained - that statistic disappears - and I want to prove it with my rescue. 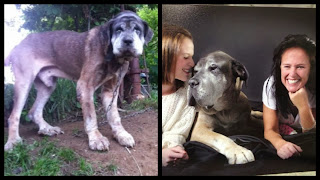 Ben was our first rescue - chained for 5 years in Preston - and he's an amazing dog who is so loved by his family now - you can see what a full member of his family he is - they even went and had professional photos done! When I found Taffy she was chained to a trailer, not even a collar around her neck - she had a chain - which had to be so uncomfortable in the heat of summer and in the winter - but she was such a gentle dog - and obsessed with balls! Her new family loves her and started off fostering her - when someone else became interested in her they decided to adopt her because they couldn't lose a dog that they said was "so near perfect". 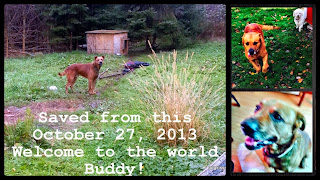 Buddy just arrived a couple days ago and was chained for 9 years! He is a gentle giant and missing a lot of fur because he's so itchy - but he's going to make someone a great dog - he needs to gain a lot of weight and his paws and head are a lot larger than his body - which means that when he fills out he's going to be a lot bigger than he is now - but he's so calm, and so nice - it's such a shame that he's been ignored for the last nine years, really a crime. 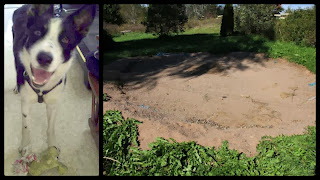 This is Roy, and this is the pit he lived in for the first 2 years of his life. He now lives on a farm having the time of his life - why would someone abandon a dog to this? How would you like to live like this? It's amazing how resilient dogs are that they can come out of this and be so forgiving and move on and be normal dogs - but they are. 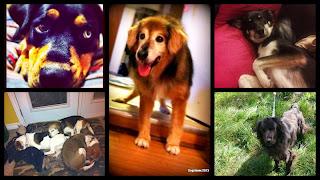 Here are some of the other dogs we've helped - Tina - who was 8 months old when we took her in - below, that puppy pile includes a beagle named Angel who became Maggie, in the middle is Billy - a dog who was chained for 17 years!  Can you imagine!  At the top right is Nikita - a dog chained for 5 years - and at the bottom right is a dog named Thunder - who is a little different - he has been kept in a vacant house - which is a chaining of a different type - but he needed rescue regardless - and he's going to be an awesome dog too.

We have also paid for the neutering of dogs if the owner agrees to bring the dogs inside the home - so there's more than one way to unchain a dog.

The 24/7 365 days a year confinement of dogs is inhumane.  We are not talking or targeting the dogs who are tied out while you put your dog out to pee, or for a few hours a day - we are talking about the dogs who have no access to water, shelter, or food and are SUFFERING.

The dogs who have abandoned in back yards in Nova Scotia and for whatever reason the NS SPCA doesn't seem to be able to help - those are the dogs we want to help.

We also have a facebook page at http://facebook.com/nochainsalllove  if you want to stay connected to us.
Posted by Joan Sinden at Wednesday, October 30, 2013