Gail Benoit wants to get back to work 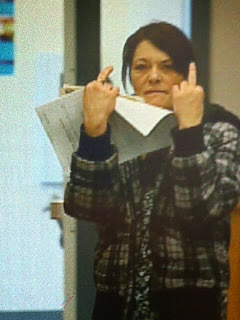 It was a cruel trick of fate for Gail Benoit when proceedings for a murder trial were happening on the same day in the same court as her application - where yesterday she was applying to be able to sell dogs again while she waits to go on trial for fraud.

She wasn't expecting to have every news organization in the province at the court house too see her application - and they weren't expecting to see her there either - it was just a happy coincidence - they were all there for an ongoing murder trial - but it worked out very positively for the people who like to keep track of what's going on with Ms. Benoit because this petition might have gone through unnoticed otherwise - so it all worked out fabulously.

The decision has been put over until next week - and let's hope the condition of her undertaking is not removed - although I don't see long term how we can keep her from performing what her life long chosen vocation has been - Kijiji isn't going anywhere, she's not going anywhere - and people willing to buy puppies after hearing a sob story aren't going to go anywhere.

There's already other people out there to take her place started popping up - so it's a way to make money that's not going away - whether Ms. Benoit does it or someone else, unfortunately.

Ms. Benoit just does it with a lot of flairand  cruelty.

It's the puppies who will continue to lose out until the government of Nova Scotia decides that domestic animal's deserve some true, real protection under the law.