Stuff to do coming up

The first thing coming up is a cat event - but it's dog friendly, and I'm helping to organize it, so it qualifies to be listed here! 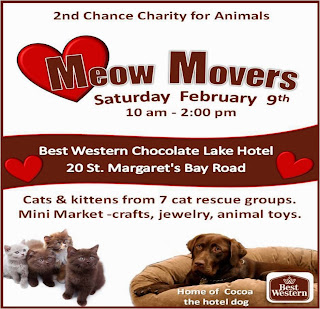 It's the next Meow Mover - a super adoption event and fund raiser for several different cat rescues that's being held at the Chocolate Lake Best Western Hotel on February 9th from 10am to 2pm on 20 Saint Margaret's Bay Road in Halifax - admission is $1.00 - and it's being held by Second Chance Charity for Animals.

The cutest kittens in the HRM will be there waiting to be adopted - and there will be free tea and coffee to warm you up - and lots of cat themed items to buy - and you'll be raising funds for much needed local cat rescues - you can't lose by attending this function.

And many thanks to the Chocolate Lake Hotel and Cocoa the dog for helping us put on this event!! 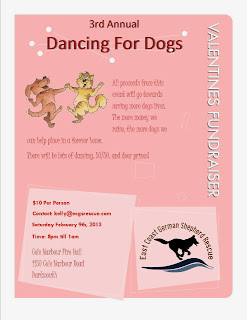 East Coast German Shepherd Rescue is putting on their 3rd Annual Dancing for Dogs Valentines Day Dance at the Cole Harbour Fire Hall, 1150 Cole Harbour Rd., Dartmouth, N.S. - also on Saturday February 9th - from 8pm to 1am - their ad says - "Join us for dancing, door prizes, 50/50 draw and more. Only $10 per person. We will also be selling tickets on a chance to win a romantic getaway to the Clockmakers Inn, Windsor, NS. All money raised at this event will help us pay down our vet bill" - sounds like fun to me!

You can find out more about the event on their facebook event page. 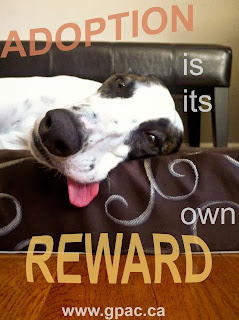 The premiere event of the winter is GPAC's Doggie Expo - being held this year on February 17th - it is an action packed day starting at 10am and ending at 3pm - held at the Halifax Forum - last year they had over 70 vendors - so hopefully this year will be just as busy - you can find out more at their facebook event page.