Gail Benoit gets caught conning woman out of litter of puppies 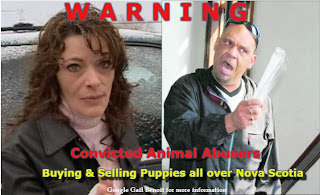 And it is turning out that this is something she has done before. A lady was advertising her puppies on kijiji - and Gail contacted her that she wanted all the puppies - free to good home of course.

Gail wanted one for herself, one for family, and ones for a couple co-workers.

She even got the puppies delivered to her for free from Cape Breton because someone had posted that they were driving from Cape Breton and if anyone had anything they wanted delivered, they`d do it for free - so she emailed them that her puppies needed a drive up.

The guy who delivered the puppies to her said she looked familiar, so when he got home he did a google search on her name - and when he saw her picture, he immediately knew who she was - and that`s how we`ve come to know what she`s done this time.

And now that this has come to light - other people are coming forward with similar stories.

So once again - it`s another opportunity to get the word out there that - PLEASE - if you are looking for a canine companion - it doesn`t matter where you look for them - whether it`s from a rescue, from a breeder, from Kijiji - wherever - make sure you do not just pick them up at a neutral location - you MUST go see where they were living, you must make sure that there is some application process - you must also interview the person you are acquiring the animal from.

If you are giving the person money - you must get some value for the money. Do your research - at the very least - do a google search on the name of the person you are getting the animal from - if anything negative comes up - RUN FAST.

We now have a more than ten year history of news files about Gail Benoit and her partner Dana Bailey at http://gailbenoit.ca/

Here's a video with some voice mails from the lady herself -

Today the Facebook group "People for Dogs" issued a public warning about Gail Benoit that as of the evening of January 3rd had almost 3,600 shares, and 140 comments which is fabulous - the word is getting out there - they said "PUBLIC WARNING - Please be advised that convicted animal abusers and puppy traffickers Gail Benoit & Dana Bailey have recently conned a litter of puppies out of lady in Cape Breton. Not only did they use aliases to convince the lady to turn over the 5 pups, but also targeted and conned a good Samaritan into transporting them to the Fall River exit ramp for them. Although these actions by Gail Benoit & Dana Bailey are nothing new, it’s something that everybody should be aware of, and exercise extreme caution when being asked to hand over litters of puppies and/or provide transportation for puppies to Waverly / Fall River / HRM roadsides / parking lots."

Gail Benoit has said over and over that she will never stop selling puppies - and everytime she gives advocates in the dog community to provide educational opportunities about the way that she sells dogs - we will never stop trying to show people that there are safer and more humane ways to acquire puppies and dogs.

As a last note - you may ask why we think it's bad to get dogs from people like Gail Benoit - I had a comment left on one of my posts about Gail today that said "People don't want older dogs. Plain fact. This will continue forever"

The thing is - people like Gail Benoit don't care about the quality of product they are selling - they only care about getting the money out of your pocket.

And they've been very good at it - when they were on trial for animal abuse in 2008 they said under oath that they had sold more than 30,000 puppies in the past 16 years they'd been in business - that's a lot of puppies, and of course some of them would've had to be healthy.

But I continue on because I want to see Nova Scotia become a place where people know that you can get puppies at shelters, that if you want to get a puppy on kijiji - that you shouldn't meet the person in a parking lot - you should go to the person's home to meet the puppy's mom and dad - it's just common sense.

It's as simple as that - we do not need a middle man.

We have almost completely gotten rid of pet stores in Nova Scotia.

Now it's time to get rid of dog brokers. The time has come.

The law definitely is not going to do it. Public education and pressure is.
Posted by Joan Sinden at Thursday, January 03, 2013