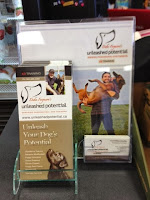 I have been to a few pet stores lately since I've accumulated a couple new dogs lately - the ones I went to this week were the Pet's Unlimited in Bayer's Lake and the Pet Valu in Clayton park and when I got up to the cash area at each store - what I saw there was this large display from a local dog trainer.

A dog trainer who I know uses shock collar to train dogs.

I asked each of the girl's at the cash at these stores if this company PAYS the store to have this display at their cash and each store clerk replied - "No" - they were not paid to put that advertisement in such a prime spot in their store - I then asked the clerk's if they knew this dog trainer used shock collars to train the dogs in his care - and they all replied - "YES" - they knew that, and some of the replies I got back were -

- he doesn't use it on all the dogs he trains;
- there are different kinds of training for different dogs;
- shock collars don't actually shock - they just buzz

I told the store clerk's that I was putting down the items that I had planned on buying and was walking out - and wouldn't be shopping there - BECAUSE they had that advertisement in their store. I said that that type of dog training was abusive and they shouldn't have that in their store. One of the store clerks said they would pass it on to the owner - and I hope they do.

It disgusts me. If they are going to give such a prime space to such abusive methods - they should give the same amount of space to positive trainers at the very least - but I don't think they should be giving that much prime space for free anyway.

If there is any positive trainer out there who wants to put the same type of advertisement in a local pet store - please contact me - I will buy the exact same display case that this trainer has - and if you give me material to put in it - I will print it out in quantities sufficient to go into the display case - and take it to the stores that I see this "trainers" materials in - and make sure that it is put right next to his displays - and if they won't let me do it - then I will demand they remove his too.

It is awful that the public is only seeing HIS type of very misleading advertising - how many dogs are being forever damaged because he's advertising in pet stores that present themselves as being positive healthy places to buy things for your dog.

What a bunch of dirty liars they are. They should be ashamed to have that matieral on their counter space.
Posted by Joan Sinden at Sunday, August 26, 2012

New comments are not allowed.