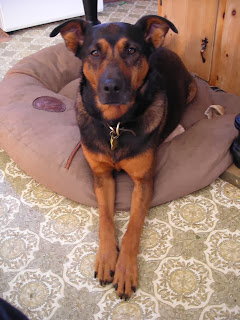 It's hard to believe that it was August 3rd, 2008 when I wrote my first blog post about Brindi the dog. Most of the posts I've written about her and her owner have been removed because it has been such a contentious story over the years, but the very first post I wrote still exists.

Tomorrow morning at 9am the judge presiding over the latest case involving Brindi and her owner Francesca Rogier is going to announce whether Brindi is going to be killed, or whether Francesca is going to have her dog returned to her.

In May, 2012 Francesca was found guilty on all 3 counts that she had been charged with in relation to an incident that happened in 2010 near her home when Brindi jumped out the window of her car and had an altercation with a dog who was walking by with it's owners on the road.

The result was only a small flesh wound to the dog - but to Brindi it meant another year of living in a cage while her life or death was decided in the courts.

A lot of people will disagree with me, and I have said this before - but I think that Francesca should get Brindi back.

I hope she does. There are altercations that happen every day in the HRM between dogs that are much more serious than anything Brindi has ever done.

Should Brindi die simply because her owner has a flamboyant personality that conflicts with a lot of people she comes into contact with?

That is what this all comes down to. And I don't think she should. She should not have been kept in a cage for the last 4 years because people cannot handle, or do not like Francesca Rogier.

And I hope Francesca can agree with me on that. I hope she doesn't flame me, or make her outrageous claims about me in the past that she has when I say that.

I am making a simple plea for Brindi's life - I know that what I say means tnothing tomorrow morning. But maybe it might make a difference for another time. Because if Brindi dies tomorrow, I hope that her life and her tragedy does not mean nothing. Her death will be the likes of Lennox over in England.

It will be that unjust. It's too bad there is no Victoria Stillwell, no Cesar Millan trumpeting her cause. 100's or people, 1000's of people - have said from the very beginning that Brindi does not need to die because of Francesca's sins. And I hope tomorrow, that comes true.

Tonight, everybody say a prayer for Brindi.
Posted by Joan Sinden at Monday, June 25, 2012

Email ThisBlogThis!Share to TwitterShare to FacebookShare to Pinterest
Labels: Brindi