Of dead dogs and mourning and those that need it 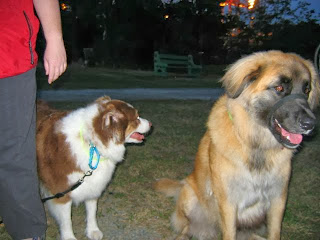 A dog named Nells died today - I took this picture of her back in 2005 at a vigil that we had the day before bsl took effect up in Ontario with her sister Smudge.

This is what her Mom sais about her passing - "There is a new star in dancing across the universe tonight.. Ms. Nells has crossed over. Amongst our sadness we are celebrating all she brought to our lives and so many other lives... please join us in celebrating her life..and look at the sky tonight as her star dances for us all.. as always.. she will never leave us.. her spirit will be in our hearts forever." 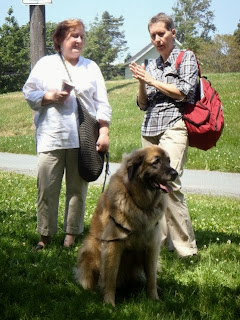 Her Mom doesn't want us to mourn Nells too much, she thinks Nells had a good life, she went peacefully, and it was her time to go.

And it got me thinking about mourning dogs in general - and how I mourned Charlie and Daisy - and some thought I mourned them too much - and I still do mourn them now.

My Dad doesn't think I mourned them too much - he says he still mourns his childhood dog Bob who died when he was 8 who was hit by a car and they had to shoot to kill him to end his suffering - he can see it all in his mind as clear as day as if it was yesterday and it still brings tears to his eyes - and my Dad is 82.

And it's gotten me to thinking about the dogs currently inside the building at the Cape Breton SPCA and what is going on inside there.

I have to tell the truth and say I haven't been following the blow by blow because my Dad is currently pretty sick so I haven't been on the computer very much - but there have been press releases and I've read granny's blog - and the provincial SPCA has given us a centralized site to go to, to keep up with what's going on from their viewpoint - from the other side - I don't think there's any way to catch up - and that's the problem.

They're the ones in charge of the animals at the moment - and they seem to have a proclivity for killing animals - at least they have in the past - so I am currently worried, and mourning all the little ones who have become collatoral damage in this war over the Cape Breton SPCA.

They should have gotten out alive and had loving owners. The animals of the Cape Breton SPCA deserve better than what they've been dealt I think. And for them I am mourning tonight.

Nells never had to deal with any of the hell on earth that the dogs of the Cape Breton SPCA did - and for that she was blessed. No need to mourn on that account - but for the dogs of the SPCA who never got a chance - mourn for them, such a tragedy.

I hope things end soon, so animals can start being saved.
Posted by Joan Sinden at Monday, November 21, 2011